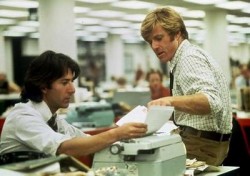 JOURNALISM'S HIGH TO LOW: Who knew that Washington Post would be so desperate for cash that they would risk being charged with influence peddling? Image above is a screen shot from Watergate, a movie about the famed Washington Post's investigation of government wrongdoing. Now their brand faces becoming a symbol for journalism's moral bankruptcy instead of journalism at its best.

The Washington Post invites you to a “salon.” It sounds so lofty (if you are politician or other luminary) or so expensive (if you are a potential “sponsor” who pays from $25,000  to $250,000). It all depends on which invitation you received, according to today’s Los Angeles Times report .

The LA Times writes The Post “abruptly canceled a series of policy dinners Thursday that were to have been underwritten by lobbyists or corporations willing to pay thousands of dollars to be in the same room as journalists and lawmakers.” In damage control mode, the Post quickly blames their “marketing department” who had “misrepresented” management’s “intent.”

Politico broke this story yesterday. “The astonishing offer,” Politico writes, “was detailed in a flier circulated Wednesday to a health care lobbyist, who provided it to a reporter because the lobbyist said he felt it was a conflict for the paper to charge for access to, as the flier says, its ‘health care reporting and editorial staff.’ ”

Here’s the kicker. The LA Times reports today: “Lawmakers who had been invited said they were not told the events would make money for the newspaper. But the Post had separately sent fliers seeking sponsors who would pay “$25,000 for a single ‘salon’ or $250,000 for 11 events.” The Times notes that the invitation to Rep. Jim Cooper, a Tennessee Democrat, was emailed directly from Post Publisher Katharine Weymouth, with no mention about money…”But the fliers to potential sponsors spelled it out.”

The LA Times further reports the pitch for money types: ” ‘ Bring your organization’s CEO or executive director literally to the table,’ the flier read. ‘Interact with key Obama administration and congressional leaders.’ The fliers described an ‘intimate and exclusive Washington Post salon, an off-the-record dinner and discussion at the home of CEO and Publisher Katharine Weymouth.’ ”

But wait, it gets worse. The LA Times writes, “The Post also sent an invitation to the Obama administration’s Health and Human Services secretary, Kathleen Sebelius — a key official in the president’s efforts to revamp healthcare.” So who else was invited from the White House? The Post, of Watergate fame, refuses to say.