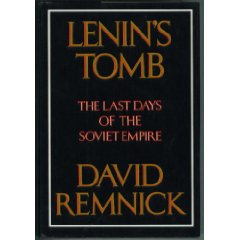 David Remnick surely knows the old Soviet Union's adage pulled out in the face of evidence of wrong-doing...so why does he apply such backwater denials to obvious and demonstrable factual errors in Jared Diamond's New Yorker essay? See "Annals of Anthropology:Vengeance Is Ours: What can tribal societies tell us about our need to get even?" April 21, 2008 issue.

This is #2 in a series of imediaethics.org blog posts that respond to Jared Diamond’s and New Yorker’s exclusive statements to Science magazine, published May 15, 2009. Blog post #2 is by journalist and guest blogger, Alan Bisbort. (Read summaries about the controversy and the $10 million libel suit against New Yorker and Diamond in AP and Chronicle of Higher Ed ).

As I read Michael Balter’s detailed account of the scandal involving Jared Diamond and The New Yorker, I could not help but think of Alexandr Solzhenitsyn.

Specifically, I thought of Solzhenitsyn’s 1963 publication entitled “We Never Make Mistakes”, which contained two long stories (or two short novels) about life in Stalinist Russia. Solzhenitsyn chose that title, and put it in quotes, because it was a statement that was quite familiar to dissidents in the Soviet Union. These were often the last words they heard from the outside world while being led away by the Stalinist security police.

A Soviet expert like David Remnick, now the editor of The New Yorker, would (or should) be familiar with that statement and book by Solzhenitsyn, published as it was during the brief thaw of the Khruschev years.

Yet Remnick was presented in the Science article, ‘Vengeance’ Bites Back At Jared Diamond” by Michael Balter, as essentially saying the same thing to Daniel Wemp and Isum Mandingo. Oh sure, he and Diamond used different words but the message was the same: We never make mistakes.

Specifically, Remnick said, “The New Yorker and Jared Diamond are the subject of an unfair and, frankly, mystifying barrage of accusations.”

“Mystifying”? Remnick’s own words contradict this statement. He told Balter that The New Yorker’s fact checker on the Jared Diamond story is “one of the best I have ever had the privilege of working with,” yet he acknowledges just a bit further on in the Science article that this same fact checker was, according to Balter, “unable to find Wemp before the story was published.” Wait. Run that by us again. The New Yorker, which has turned its fact-checking prowess into something of a fetish in recent decades, had on its staff one of the “best” fact checkers of all time and this person could not locate the main source for the story to check on some rather salacious accusations Diamond had made?

Rhonda Roland Shearer, who had never set foot in Papua New Guinea, picked up a telephone and, through a researcher on the ground in the country, quickly located Daniel Wemp on her own dime in relatively short order. Such a smokescreen as Remnick has erected would be worthy of TASS or Pravda, but the truth is that this venerable fact checker did not try to contact Wemp or Isum Mandingo until after the article appeared.

Further echoing the world of Solzhenitsyn, New Yorker’s executive editor Pamela Maffei McCarthy (one would assume with Remnick’s approval) responded to Shearer’s initial requests for a dialogue with this Stalinist email rejoinder (found among the resources from the lengthy report on the scandal at imediaethics.org): “We’ve answered your questions in good faith, and we believe that neither a staged phone call nor further correspondence will serve any useful purpose.”

My guess is that Remnick, Jared “the complaint has no merit at all” Diamond and McCarthy would not be taking the same high-handed approach were Daniel Wemp or Isum Mandingo American citizens.

Let’s say they were members of rival street gangs who’d allegedly waged a deadly drug-turf war in the 1990s and yet had walked away without legal consequences. Let’s say that Diamond befriended one of these gang members when he—setting the dynamic similar to the one had with Daniel Wemp—came to scrub the bottom of the Diamond family swimming pool. In the course of that encounter, the two men got to talking, the reformed street gang member and the UCLA professor.

My guess is that those gang members later cited by name in the article—but who were never contacted by the reporter or the magazine—would right about now have attracted the most expensive team of lawyers since the O.J. Simpson murder trial. And The New Yorker’s lawyers would have their hands clamped tightly over Remnick’s and Diamond’s mouths. But Remnick and Diamond are “standing by” their story. Because, to echo the state police so familiar to Alexandr Solzhenitsyn, “we never make mistakes.”