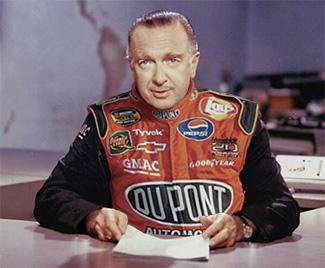 The above image is a StinkyJournalism spoof that merges the icon of ethical journalism, Walter Cronkite, with what may be its future--Nascar-like branding on the clothing of reporters. WGN Ch.9 Chicago, and the clothing company, L.L.Bean, have "partnered." Reporters will be clothed in L.L. Bean outerwear in exchange for a credit at the end of the newscast. (Photo Illustration).

Phil Rosenthal reported in The Chicago Tribune May 19 that WGN Channel 9 and L.L.Bean have partnered, exchanging L.L.Bean outerwear for a credit at the end of the newscast.

However, iMediaEthics found a YouTube video that shows May 13 WGN’s “Midday Fix” feature interviewing an L.L.Bean spokesperson about fly fishing gear for a four-minute segment. Is it a news segment or an undisclosed infomercial about “unique things at L.L. Bean” stores to sell fishing products?  Judge for yourself here.

The Chicago Tribune and WGN-Ch.9 are both owned by Tribune Co., as Rosenthal acknowledged.

Rosenthal reported that Caputo said no one at Channel 9 is required to wear the outerwear and that they can also cover up the logo.