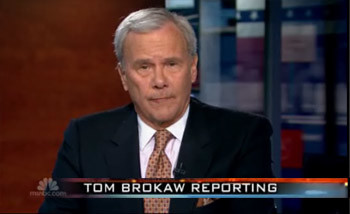 Riddle: Why did NBC run an infomercial for a competitor’s programming during its Nightly News with Brian Williams on April 1st?

With all due respect to Dr. Martin Luther King, outtakes from the History Channel’s new documentary, “King,” are neither breaking news, nor a substitute for actual NBC reporting. So why did NBC editors deem it worthy of a 4 minute segment? And why would NBC shill another channel’s product?

The troubling answer – an obvious conflict of interest – was not disclosed by Williams or NBC at the beginning of the segment. Nightly news programming has apparently become, as evidenced by this debacle, just another non-journalism format and a forum for advertising assets the broadcast company owns.

The History Channel only appears to be a competitor with a different financial interests than NBC Nightly News. However, the fact is that General Electric owns NBC, MSNBC and, you guessed it, the History Channel, too. Go to one of many charts online that details undisclosed Media ownership interests and see for yourself.

I have a dream!

Media companies counter that disclosures like these are too cumbersome to reveal. Nonsense.

Indeed, such a statement would have set off alarm bells. News viewers would be prompted that a commercial is coming and they could take necessary precautions (like finding the remote). Having to make proper disclosures of conflicts of interest might also serve as an incentive for big media to produce material that fits the bill for bona fide journalism.

NBC may think they are fooling the public, but the joke is on them. We need real news . . . even on April’s Fools Day