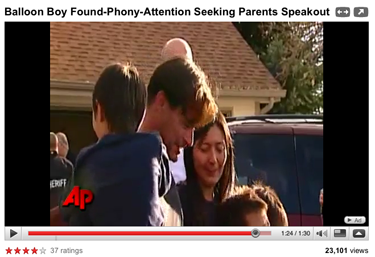 In this still image from a YouTube video, the Heene's display emotion at the return of their son. This emotional acting may have helped to fool law enforcement and the media into believing their hoax. (Credit: AP)

The Balloon Boy hoax this October captured so much coverage in so many media, it’s appropriate to wonder what it was about this particular scam that duped the press so thoroughly and so widely. Why didn’t anyone catch it, and how can reporters do better next time?  Slate writer Chris Wilson, in an October 30 article points to the parents’ distress as a major force in the spread of the hoax. Media and law enforcement believed the parents largely on the basis of their emotional behavior and despite conflicting facts, he argues.

But why couldn’t they (or we) tell that they were faking it?

“This was a failure of what we’ll call emotional forensics: the process of determining whether someone’s reaction to a crisis is genuine,” Wilson says.

In the case of the Heenes–who wrongly reported their 6-year-old son Falcon had been carried away by a homemade weather balloon on Oct. 15–almost everyone was duped. (Read Mayumi Heene’s October 17th affidavit admitting to the hoax here.)

Wilson writes, “That night, CNN’s Jane Velez-Mitchell described a “very emotional news conference just moments ago, the dad clearly choking up.”  …Mayumi Heene’s 9-1-1 call, released the next day, was even more convincing: This woman was obviously distraught. We now know, of course, that Richard and Mayumi Heene were merely credible actors who duped the networks and the sheriff.” (Links original to Wilson’s article)

Could the media have done better, been less credulous?  “There is little empirical study of how well people can detect a feigned emotion,” Wilson says, “but there are many studies of how well they can detect liars.”

Lie detection often rests on a subject’s inability to hide his real emotions while telling a lie. Enjoying the subterfuge, a thief might unintentionally smirk while giving his alibi. “Very few people can entirely mask the real emotions that they’re feeling, nor can they fake all the facial cues of an emotion they’re not feeling in just the right sequence,” says Wilson.

But detecting fake emotions might be more difficult than noticing real emotional cues in a liar, Wilson writes, quoting Jack Mayer, a University of New Hampshire psychologist who pioneered the field of emotional intelligence, who says “because people so differ from each other, evaluating whether an emotion is valid or not is very complicated for an observer.” Someone feeling grief might be quiet and subdued, while another might scream and lash out.

The media’s responsibility in failing to recognize the fake-ness of the Heenes’ emotions is in putting too much confidence in their (and our) ability to read emotions. “The trouble with situations like the Heene fiasco… is that most people consider themselves very accurate judges of emotion,” says Wilson. We know catching someone in a lie can be hard, because we’ve lied successfully and gotten away with it ourselves (well most of us anyway). “But judging someone’s emotional performance seems far more instinctual, and we tend to assume that we’re good at it,” Wilson says.

In some ways, we’re right to assume such, he continues.  “Very few people are able to feign emotion with any degree of verisimilitude. The ones who can do it often earn a very handsome living.”

At the same time, there were definite clues here that Richard Heene, and his wife Mayumi were just those kind of people. The pair met in an acting class in Los Angeles, after all. “We know from his Wife Swap appearances that he is a devoted thespian who shows no apparent remorse at manipulating his family or the public in the pursuit of fame,” Wilson writes. “This works in his favor: The fewer conflicting emotions you have behind the one you’re trying to pull off, the less likely you are to ‘leak’ emotions and expose yourself as a fraud.”

Larimer County Sheriff Jim Alderen told the network [CNN] that “it was real obvious from [the Heenes’] demeanor early on that they thought he was in the balloon.” Later that day, he told Wolf Blitzer, “I can tell you, having got to the scene somewhat after the boy came out, I—I, too, saw the parents were visibly shaken by this event and certainly seemed very credible.”

It is possible that had networks been less credulous of the Heenes’ emotions, and more skeptical of the facts of the case, they may have discovered the truth more quickly. In retrospect, the physical possibility that Falcon could have flown and remained in a cardboard-bottomed balloon seems slim–that he was able to climb in and stay in while the balloon took off without one of his brothers helping him even less so.

“In any case, [Heene’s] acting success on the national stage suggests that we might do well to avoid using a suspect’s emotional response as evidence one way or another,” Wilson argues.

In light of the particulars of the Heenes case, this sounds like good advice.