Why didn't NYT Credit NJ Record for Bridgegate E-mails? 'Would have been a

Why didn’t NYT Credit NJ Record for Bridgegate E-mails? ‘Would have been a generous gesture,’ NYT public editor says 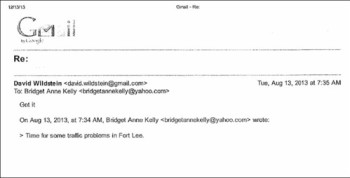 A screenshot of a Bridgegate e-mail chain. Credit: Record, screenshot.

New York Times public editor Margaret Sullivan addressed complaints about the Bridgegate e-mails controversy, specifically that the paper didn’t credit the Bergen Record, which “was the first to post a story about the damning email exchanges” related to the nickname for the controversy involving New Jersey governor Chris Christie’s aides and the closure of a portion of the George Washington Bridge near Fort Lee.

According to Sullivan, the Times didn’t cite the Record‘s reporting because it got all of the information for its story by itself. Metro editor Wendell Jamieson told Sullivan:

“We broke the story on our own just minutes after they did…We got the emails 100 percent on our own, and posted them, oh, I don’t know … 20 minutes later? Thirty minutes later?”

While Sullivan wrote that she understood that reasoning “The Record owned this one early and broke it first.”

“A mention of The Record in this week’s articles would have been a generous gesture and would have helped to tell the full story,” she added.

Why didn’t NYT Credit NJ Record for Bridgegate E-mails? ‘Would have been a generous gesture,’ NYT public editor says