Why didn't Poynter Disclose It's Being Paid in ESPN Ombudsman Position?

Why didn’t Poynter Disclose It’s Being Paid in ESPN-Ombudsman Position? 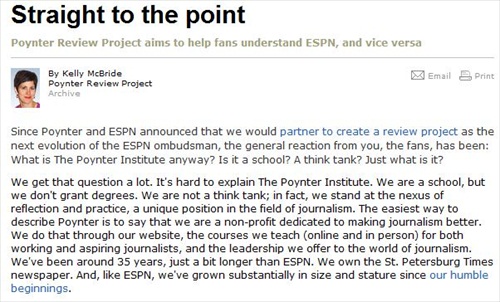 The first column from the Poynter Review Project for ESPN is out. (Credit: ESPN, screenshot)

iMediaEthics wrote in late February when the project was announced, noting then that the announcement didn’t disclose if any financial arrangement was made between Poynter and ESPN.  We asked Poynter about that, and in a Q & A with iMediaEEthics, Poynter president Karen Dunlap revealed that Poynter “will be paid.”

We asked when and how Poynter would disclose this information. Dunlap responded at the time: “The first column written by Poynter faculty will explain the review project.  That’s a good place for them to disclose that Poynter will be paid, but I don’t expect to release the amount.  We usually don’t do that in business agreements.”

Dunlap also told the New York Times about the existence of a financial arrangement for a report posted the same day as our Q & A.

In the first column for ESPN, McBride described what the Poynter Institute is and said that she and Poynter’s Regina McCombs “will write a monthly column, as well as a couple of shorter installments as developments warrant.”

McBride wrote that the project will “look for the pressure points” at ESPN and claimed that “since its inception, ESPN has grown faster than possibly any media organization in modern history.”

Specifically, McBride noted that “it’s no surprise that there are conflicts of interest and competing loyalties” and that ESPN is “a company in constant transition.”

For example, several ESPN reporters were called out this year for their endorsement deals.  In the case of Chris Fowler, Kirk Herbstreit and Lee Corso, ESPN was unaware that the three personalities had signed on to endorse Nike. And Erin Andrews’ endorsement of Reebok was questioned as it was announced just two weeks after she criticized Nike on-air.

McBride explained in her column that the Poynter Review Project will look both at individual incidents and the big picture of ethics at ESPN in all of ESPN’s formats.  She wrote that the Poynter faculty working on the project intend to write one “longer” article and some “shorter, more timely installments when appropriate.”

“Our primary purpose is to help fans understand ESPN’s values and to help ESPN understand fans’ expectations. We hope to bring transparency to this very large company by peeling back the layers of decisions that culminate in both success and failure, and all that falls in between,” according to McBride.

McBride wrote about criticism of Pres. Barack Obama’s on-air filling in of his NCAA bracket and mentioning of the USAID.gov donation site.  In her comments, she gave the background behind the decision to allow Obama to “plug” the site.

The project is being billed as “a new step in media transparency” and an expansion of an ombudsman role.  The Organization of News Ombudsmen describes an ombudsman as “someone who handles complaints and attempts to find mutually satisfactory solutions.”  Ombudsmen are expected to look into the public’s complaints about “accuracy, fairness, balance and good taste in news coverage” and provide “appropriate remedies or responses to correct or clarify news reports.”

However, in an early March Q & A with Sports Illustrated, Dunlap and McBride emphasized that Poynter isn’t going to be addressing readers’ complaints, per se.  Dunlap explained:

“The reason is it is called the Poynter Review system is we tried not to be ombudsman, and a big difference is what you just said: Ombudsman typically exchange with the audience, including in the mail. We don’t plan to engage that. It’s not our plan to be the typical ombudsman.”

McBride added that the Poynter project won’t be “the complaint department.” While they may look at readers’ feedback, Poynter won’t respond to readers’ inquiries.

“We will dip into the mailbag but we will not systemically go through it and answer every one. That would be impossible,” McBride is quoted as saying.

iMediaEthics has written to Poynter’s Karen Dunlap to ask why the institute did not disclose the financial arrangement in its first column and how the project will be an advancement of the ombudsman position if it doesn’t address readers’ complaints.  We will update with any response.

Why didn’t Poynter Disclose It’s Being Paid in ESPN-Ombudsman Position?