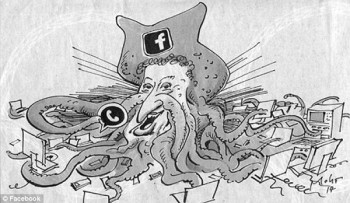 The above cartoon of Mark Zuckerberg has been accused of anti-Semitism.

German cartoonist Burkhard Mohr apologized after his cartoon of Facebook’s Mark Zuckerberg was accused of anti-Semitism and invoking “Nazi propaganda.”

The cartoon, published Feb 21 in German newspaper Sueddeutsche Zeitung showed Zuckerberg as an octopus with tentacles going into computers. Zuckerberg is given a long hook nose and is wearing a pirate’s hat with the Facebook icon on it. Tablet magazine published a scan of the page in print.

“Mark Zuckerberg cannot be reached for comment. We understand that the artist and the newspaper have issued a public apology about this cartoon. We have nothing to add to this.”

Why Memories of Nazi Propaganda are evoked

iMediaEthics spoke with The Simon Wiesenthal Center’s Associate Dean Rabbi Abraham Cooper about the cartoon and the history of Nazi anti-Semitic imagery.

“It’s just an absolute outrage and to me, reflects a failure from the point of the view of the newspaper as well as editorial,” Cooper told iMediaEthics.

But, he noted “to make very clear, Mark Zuckerberg and Facebook are absolutely fair game for criticism, critiques, analyses and put downs.”

Cooper, who has been with the center since it started, explained that “the portrayal of your opponent as less than human, the animalization, is one of the ways to dehumanize a target.”

The Nazis weren’t the only ones to use octopus imagery. iMediaEthics found this French cartoon from the ’40s showing Hitler as an octopus.(Credit: PBS)

“Nazis were masters of propaganda,” he said. “The octopus, the spider web, the puppet master pulling the strings. These are the kinds of emotional shorthand that were used throughout the ’30s, especially in the [Nazi] publication Der Stuermer,” whose masthead read “The Jews are our Misfortune.”

“When you see the combination in this cartoon of using the octopus, the tentacles, with the exaggerated nose coming right out of the Zuckerberg face….then there is simply no doubt whatsoever that it’s anti-Semitic,” he told iMediaEthics.

The center identifies itself on its website as a “a global Jewish human rights organization that confronts anti-Semitism, hate and terrorism, promotes human rights and dignity, stands with Israel, defends the safety of Jews worldwide, and teaches the lessons of the Holocaust for future generations.”

What about the German Newspaper’s Apology?

iMediaEthics wrote to the newspaper asking for more information about this incident, including how many readers saw the cartoon, if the apology was published in print, and how many complaints the newspaper received.

Sueddeutsche Zeitung is Germany’s biggest and oldest national daily newspaper and is described as “The New York Times of Munich” in 2005 by the Goethe-Institut, Germany’s “cultural institution.” It is based in Munich, which Der Spiegel identifies as “where Hitler and the Nazis got their start.”

Eva Dehoust, Head of Corporate Communications for the newspaper, told iMediaEthics that Mohr revised the cartoon that was originally published and “in more than 90 percent of the editions the re-worked drawing appeared.” She also provided iMediaEthics with a copy of Mohr’s apology.

“About internal editorial processes, research or resources we do not issue information,” she added in response to our additional questions, according to a translation of her e-mail.

Here is Mohr’s apology in part (according to a Google translate):

“Anti-Semitism and racism are ideologies that are totally alien to me. All the more it shook me that one of my cartoons has now been published in this light.”

He added that his drawing was commenting on Facebook’s recent purchase of WhatsApp and claimed his image was spoofing Pirates of the Caribbean. Further, Mohr claimed he doesn’t “defame religious beliefs of origin.”

According to the BBC, the cartoon was only published “in early editions,” and “later editions” were edited to show “an empty hole where Zuckerberg’s face had been.”

iMediaEthics asked Cooper at The Wiesenthal Center about the apology statement put on the newspaper’s website when we spoke with him last night. We read the rough translation of the apology by phone as he had not seen it.

“It’s not about the pirates, or a kids’ game or a kids’ movie,” Cooper told iMediaEthics. “It’s about symbols that were used to demonize and dehumanize an entire people with catastrophic genocidal results from the country this person was born into, and if he didn’t know better, he should.”

Being from Germany, Cooper argued, the cartoonist had to know of the historical implications of the cartoon “unless this person was living under a rock.”

The Associated Press noted that the newspaper has once before gotten in trouble for a similar issue. Last year, it used a “picture caption that likened the state of Israel to a ravenous monster,” the AP reported. “The paper said at the time that it regretted any “misunderstandings.””