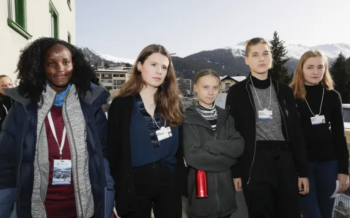 The uncropped AP photo. Te AP cropped Vanessa Nakate out of this image.

The Associated Press apologized for cropping out Ugandan climate advocate Vanessa Natake from photos taken at the World Economic Forum in Davos, Switzerland.

Nakate spoke at Davos with Greta Thunberg and other climate activists.

Nakate called out the photo crop on Twitter, asking “why did you remove me from the photo.” iMediaEthics has tweeted Nakate.

The AP pointed iMediaEthics to its online statement about the matter and told iMEdiaEthics, “The photo on the AP story was replaced with the uncropped photo and additional photos that included Vanessa Nakate.”

“We regret publishing a photo this morning that cropped out Ugandan climate activist Vanessa Nakate, the only person of color in the photo. As a news organization, we care deeply about accurately representing the world that we cover,” AP executive editor Sally Buzbee said in a statement. “We train our journalists to be sensitive to issues of inclusion and omission. We have spoken internally with our journalists and we will learn from this error in judgment.”

“Vanessa, on behalf of the AP, I want to say how sorry I am that we cropped that photo and removed you from it. It was a mistake that we realize silenced your voice, and we apologize. We will all work hard to learn from this. “

In addition, the AP’s director of photography David Ake said, according to the BBC: “The photographer was trying to get a picture out fast under tight deadline and cropped it purely on composition grounds because he thought the building in the background was distracting.”