Why No Disclosure on Former Obama Press Assistant's Articles on Obama?

Why No Disclosure on Former Obama Press Assistant’s Articles on Obama? 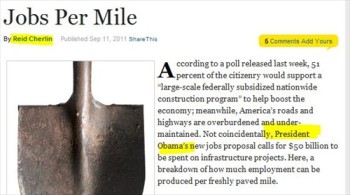 Yahoo News questioned why there is no disclosure of Reid Cherlin's former employment on stories like the one pictured above. (Credit: NYMag, screenshot, highlight added)

Yahoo News’ Dylan Stableford questioned why New York magazine didn’t disclose its writer Reid Cherlin’s possible conflict of interest in at least two of his reports for the magazine.

A New York magazine spokesperson defended the lack of disclosure by stating “We don’t feel his former work presents a conflict with regard to these pieces,” according to Yahoo News.

Yahoo News added that Cherlin includes his former position at the White House on Twitter and suggested that Cherlin only should add a disclosure statement on stories about the Obama administration.

Why No Disclosure on Former Obama Press Assistant’s Articles on Obama?