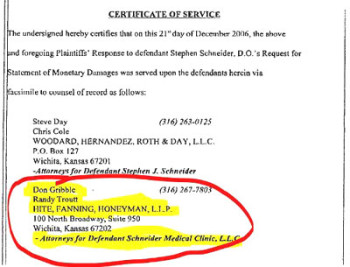 Special Report, Part 3:  This morning at 9:30 AM CST in Wichita, Kansas, the state’s “pill mill” doctor Stephen Schneider and his nurse wife, Linda Atterbury Schneider, are set to be sentenced. The federal government convicted the couple of conspiracy that was linked to 68 deaths. U.S. district attorney Tanya Treadway has asked for life sentences for the Schneiders, the Associated Press reported.

Not only is Wichita Eagle journalist Ron Sylvester still not disclosing his conflict of interest in reporting the case for the daily newspaper, but in the most recent twist to our ongoing investigation, he has recently slipped a statement into the comments section of his own blog where he attempted to explain away a reader’s criticism of his conflict of interest.  See Part 1 and Part 2 in this series.

The Schneiders were convicted in June of most of the 34 criminal counts brought against them by the U.S. district  attorney.  StinkyJournalism has been investigating the reporting of The Wichita Eagle on the Schneiders for several months because Eagle courts reporter Ron Sylvester hasn’t disclosed that his wife’s law firm represents the Schneiders’ medical clinic in at least 23 civil cases.

Sylvester’s wife, Gaye Tibbets, has been a partner at the law firm Hite, Fanning & Honeyman since Jan. 2009.  Sylvester has written more than 80 articles and blog posts on the Schneiders’ case — plus the hundreds if not thousands of live tweets he’s posted during court proceedings — all without notifying the public and his readers that his wife’s law firm financially gains from the case he reports on.  As detailed in our second report on Sylvester’s ongoing undisclosed conflict of interest, Tibbets’ law firm billed hours during the Schneiders’ eight-week criminal trial, even though the firm only represents the clinic in its civil cases.

OxyContin victim activist and blogger Marianne Skolek called Sylvester out for his conflict of interest  in the comments section of his Aug. 19 Wichita Eagle blog post.

Skolek, who has written several reports about the Schneiders and their trial, featured a link to our second report on Sylvester here on her Aug. 24 report.  She wrote, at 5:59 AM in the comments, that the case: “had all the elements of justice being heard.  Not to mention a reporter covering the trial who had a conflict of interest. His wife is an attorney in the law firm representing the convicted doctor.”

Sylvester’s defense for himself on his Wichita Eagle blog Aug. 19 at 9:37 AM in the comments section ends up being the closest thing to an official statement from anyone at the Kansas newspaper since StinkyJournalism started calling in May.  Sylvester wrote:

“That is inaccurate. My wife is not involved with the Schneiders or their medical clinic. Other lawyers at her firm represent the insurance company that covers the clinic’s former employees. My editors have determined there was no conflict in my covering this trial.”

This was a surprising statement by Sylvester since every court document has stamped at the beginning and the end that Hite Fanning is representing the Schneider Clinic. So, we asked Rita Noll, chief attorney and deputy director of Health Care Stabilization Fund, one of the insurers, what the truth is.

She quickly e-mailed correcting the erroneous facts in Sylvester’s blog comment. She wrote:

So, Sylvester’s blog comment is not true. Further, the comment indicates that his editors may or may not have been aware of his wife’s relationship to the Schneiders’ case. Dozens of phone calls and e-mails from StinkyJournalism to Sylvester, his Wichita Eagle editors and the Eagle’s parent company, McClatchy Co., went ignored over the summer.  Our first two reports (see here and here) were similarly ignored by the newspaper and Sylvester.  If Sylvester told his editors the same thing he told Skolek in the comments, then they would have been misled.  So, StinkyJournalism’s publisher, Rhonda Roland Shearer, reached Sylvester by phone yesterday to confront him about his comments and finally see if we could get an on-the-record response.

Shearer asked Sylvester if he would correct his errors in the comment section and she read him Noll’s correction of his misleading information. Shearer asked him to explain himself if he believes there is no conflict of interest.

Sylvester simply repeated multiple times that he’s been instructed by his editor to redirect any questions from us about the conflict of interest to Eagle editor Sherry Chisenhall.

After listening to Shearer for several minutes, he sarcastically commented that she should tell his editor that she “can read his mind” and slammed down the phone.  Shearer immediately called Chisenhall, whose assistant Peggy Smith took a message.  She further e-mailed Smith, Chisenhall and Peter Tira, Communication Director, for The McClatchy Company, the Eagle’s owner to detail the misrepresentation of Sylvester’s comment and Noll’s response.

After five years of reporting on the Schneider story, Sylvester should know that his wife’s law firm represents the Schneider Medical Clinic.

We will update this story with the results of the sentencing at the bottom of this article. Read our first two reports in our series detailing Sylvester’s conflict of interest here and here.

In a strikingly similar situation, The New York Times editors published a note just a week ago, explaining that they would never have allowed columnist Joe Nocera to write about a lawsuit his fiancee’s law firm represents if they had been aware of it.  The editors wrote:

“In the Talking Business column in Business Day on Saturday, Joe Nocera wrote about a lawsuit by Oracle against a division of SAP, claiming theft of intellectual property. Mr. Nocera learned after the column was published that Oracle was represented by the law firm of Boies, Schiller & Flexner, where his fiancée works as director of communications. To avoid the appearance of a conflict of interest, Mr. Nocera would not have written about the case if he had known of the law firm’s involvement.”

Here’s a case where the Times wouldn’t have let their columnist, who offers opinion as well as facts, write about a lawsuit in which his fiancee works for the defendent’s law firm “to avoid the appearance of a conflict of interest” (emphasis ours).  Yet, The Wichita Eagle assigns their reporter – one whom readers trust to be unbiased and unfettered from any personal stake in the outcome of the case – to report not just one article, but more than 80 reports over five years on the Schneiders, whose medical clinic his wife’s firm represents.

Sylvester has almost exclusively reported The Wichita Eagle’s coverage of the investigations, arrests, trials, and convictions of the Schneiders.  And, StinkyJournalism won’t be surprised if he’s still allowed to report the sentencing of the couple, despite the undisclosed conflict.

Unlike the Times, the Wichita Eagle thus far is apparently incapable of admitting errors and mistaken conflicts of interest to its readers.

Lingering question:  Would Sylvester’s wife, Gaye Tibbets, have been named a partner in Jan. 2009, four years and nearly forty articles into Sylvester’s reporting of the doctor, his wife and their clinic, if he had aggressively investigated and negatively reported on the Schneiders and profiled their victims?

Sylvester is a leader in the Society of Professional Journalists and a 2008 candidate for SPJ president. The SPJ’s code of ethics advises that journalists “avoid conflicts of interest, real or perceived.”

When asked this summer  for comment about Sylvester’s conflict of interest, Holly Edgell, who was the SPJ’s director for Sylvester’s region at the time and is a current Patch.com regional editor, wrote in an e-mail to StinkyJournalism that “I can tell you that SPJ has encouraged Ron to disclose the relationship, but we are not a policing agency and can’t force him to do anything.”

Contributions to this report made by Rhonda Roland Shearer.

UPDATE: 10/19/2010 8:29 AM EST: It seems that McClatchy Co. and Eagle editors are taking Sylvester off the story after our request for comment for this report–at least for now–and will instead use the Associated Press coverage, as evidenced by Sylvester’s recent tweet. Sylvester tweeted seven hours ago following our yesterday e-mail to him and his editors : “AG candidate debate competes with sentencing of Dr. Schneider and his wife. Eds decide I get debate, we’ll pick up sentencing off AP wire.”

Howver, StinkyJournalism fact checked Sylvester’s claim with the Hilton. There is an Attorney General “luncheon and debate” at the hotel today but it starts at noon local time whereas the sentencing is 9:30 AM CST.

“We saw Mr. Sylvester’s tweet http://twitter.com/rsylvester/status/27806802951 announcing that editors decided to have him cover the Attorney General debate not Schneider sentencing, even though we all know he has written 80+ reports over five years on the Schneiders.

“To quote Truman — the kitchen must have been too hot for Sylvester — he will not be covering the Schneider sentencing today from the courtroom.  Wanted to be sure you knew,” Skolek wrote to StinkyJournalism this morning.

Therefore, no “pronouncement of sentences” will happen until “later in the week” as the above covers multiple days.

We also heard back from Rita Noll, the chief attorney of the Health Care Stabilization Fund.  Noll told us back in May that the fund had paid Sylvester’s wife’s law firm, Hite Fanning, $338,007.31. Noll’s Oct. 20 e-mail to StinkyJournalism updated that total to almost $400,000.

“To date we have paid $393,914.16 to the law firm Hite Fanning & Honeyman, which is for all fees and all expenses to defend Schneider Medical Clinic in all cases alleging medical negligence,” Noll told StinkyJournalism via e-mail Oct. 20.

UPDATE: 10/21/2010 6:51 PM EST: Sylvester and Wichita Eagle editors still haven’t responded to StinkyJournalism’s e-mails or this article regarding either Sylvester’s factual error or his undisclosed conflict of interest.  However, Sylvester reported on the Schneiders’ sentencing Oct. 20.  Like every other article of Sylvester’s on the Schneiders, that article featured no disclosure of his wife’s law firm’s relationship to the Schneiders’ clinic.