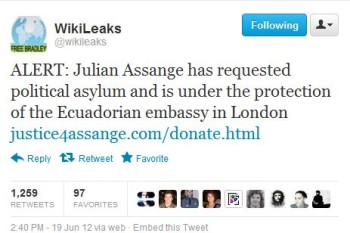 Julian Assange appealed to the Ecuador Embassy in London for political asylum yesterday.

According to a statement on the Ecuadorian Embassy’s website:

“While the department assesses Mr Assange’s application, Mr Assange will remain at the embassy, under the protection of the Ecuadorian Government.”

The embassy noted that it has “an obligation to review all applications for asylum” and that it isn’t “interfering in the judicial processes of either the United Kingdom or Sweden.”

As we have written, Assange has  appealed many times an order for his extradition to Sweden for questioning about accusations of sexual abuse while in Sweden.  Back in December 2010, he turned himself in to UK police, was put in Wandsworth Jail and then was granted bail.  Before he turned himself in, Sweden put out an international arrest warrant  for Assange, and Ecuador briefly offered Assange asylum.  In April 2011, U.S. Ambassador to Ecuador Heather Hodges was asked by Ecuador’s government to “leave as soon as possible” after WikiLeaks published leaked cables including cables from her.  In May, Assange interviewed Ecuador’s President Rafael Correa for his Russia Today show. Check out the Guardian’s timeline of events here.

Former WikiLeaks staff member and current Guardian journalist James Ball weighed in on Assange’s appeal to Ecuador, offering possibilities for Assange’s future.  He outlined the three options for “what kind of story” is going on and noted the it’s all “the aftermath of a few days in Sweden”:

The Associated Press reported that going to the embassy “violated the terms of his bail” and that he “faces arrest if he leaves” the embassy.  The Independent quoted a spokesperson fo the UK police as explaining that Assange broke bail because he failed to check in at “a named bail address between 10 pm and 8 am.”

People who paid the £240,000 bail money for Assange, like Vaughan Smith and Michael Moore, might lose the cash, the Irish Independent reported.

“They could lose their money if Assange absconds, though the final decision will be up to a judge,” according to the AP.

Jemima Khan, another person who contributed bail money, confirmed with the Guardian‘s Ian Katz on Twitter June 19 that she is responsible with the bail money.  In response to his question “Are you on the hook for Assange bail?” she tweeted:  “Yes. I had expected him to face the allegations. I am as surprised as anyone by this.”

Filmmaker Michael Moore posted a statement on his website and Facebook page writing “It’s up to you, Rafael” [Correa, the president of Ecuador].  Moore wrote that Assange “should cooperate with the inquiry” into the allegations against him, but argued that Sweden just wants “to extradite Assange to America.”  See here Moore’s Dec. 2010 post for the Daily Kos “Why I’m Posting Bail Money for Julian Assange.”

We have written to the Ecuadorian embassy in London for more information and will update with any response.