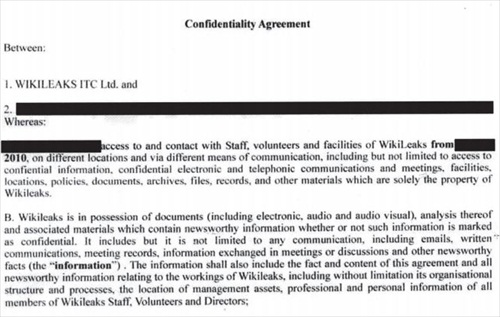 Leak WikiLeaks material as a staffer and you may be sued for $20 million.

New Statesman reported on a leaked “confidentiality agreement” that WikiLeaks “associates” must sign barring them from turning over any material WikiLeaks holds or else risk a lawsuit.

The agreement, described by New Statesman as “draconian and extraordinary,” also claims to restrict any signatories from revealing “all newsworthy information relating to the workings of WikiLeaks.”

James Ball, a former WikiLeaks employee and current Guardian employee, admitted to being responsible for leaking the document in an article for the Guardian.

Former WikiLeaks “partners” the New York Times and the Guardian both released books about their relationship with WikiLeaks, as has former WikiLeaks staffer Daniel Domscheit-Berg.

“A genuine and reasonable pre-estimate of the loss to WikiLeaks from a breach of this agreement based on a typical open market valuation for the information for a significant breach of the agreement is in the region of £12,000,000.”

StinkyJournalism wonders how WikiLeaks determined that sum. (We are writing to ask). The Wau Holland foundation has stated that WikiLeaks received  $1.9 million in donations in 2010.

James Ball, the source of the leaked confidentiality agreement, explained in a column for the Guardian (see here) that he didn’t intend to necessarily leak the document, which he called “the most restrictive” he’d ever seen, but rather the document went public when he sent a picture of part of it publicly on Twitter to Heather Brooke.

“Needless to say, this provoked a lot of interest, and one thing then led to another. But this document deserves to be in the public domain.”

Ball added that he was given the document in January and it was “backdated” by seven months, during which time Ball had “given dozens of print and TV interviews, at Julian’s instruction.”

“Could this document now be used retrospectively to mount a legal challenge should Julian ever so wish? It could,” Ball commented, noting that he didn’t sign.  After Ball didn’t sign, “more than one person in the room asked for their copy of the agreement back. This was refused,” according to Ball.

Ball went on to criticize WikiLeaks for having “no board or no oversight.”

Mediaite questioned if it’s “hypocritical for a group that sees no problem in releasing others’ private information to keep their own under such a sturdy lock and key? Or is this just a necessary practice for a business that is providing a service?”

This leak notably comes just a few weeks after WikiLeaks leaked a group of files from Guantanamo Bay, the second WikiLeaks leak in a row to have been leaked to non-WikiLeaks “media partners” in advance of WikiLeaks’ publication.

As a result, Julian Assange reportedly threatened to sue the Guardian.

Assange has also threatened to sue the Guardian for its book about WikiLeaks, WikiLeaks: Inside Julian Assange’s War on Secrecy, but as of a few weeks ago, the Guardian’s investigations editor David Leigh has stated that the newspaper hasn’t received any lawsuits or writs from WikiLeaks and/or Assange.

UPDATE: 05/20/2011: 10:02 AM EST: StinkyJournalism asked the Guardian’s James Ball, who used to work for WikiLeaks and is credited with leaking the confidentiality agreement, if he knew where WikiLeaks got the $20 million figure.

Ball responded: “Not the foggiest – I suspect it’s an impressive-sounding number picked from nowhere as a ‘market value’ for the embassy cables.”

Our e-mail to the contact address on WikiLeaks’ website was returned with a message that it couldn’t be delivered.