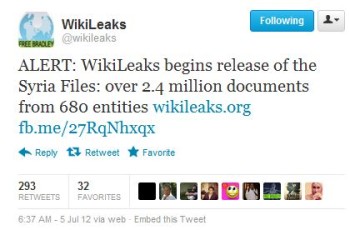 WikiLeaks is publishing what it says is 2.4 million emails from Syria.

The documents are called “the Syria Files,” and according to WikiLeaks’ website, the emails are “from Syrian political figures, ministries and associated companies, dating from August 2006 to March 2012.”

On its website, WikiLeaks founder and editor Assange is quoted as saying about this leak publication:

In a note on its website, WikiLeaks addressed verification of the e-mails, writing:

“In such a large collection of information, it is not possible to verify every single email at once; however, WikiLeaks and its co-publishers have done so for all initial stories to be published. We are statistically confident that the vast majority of the data are what they purport to be.”

WikiLeaks’ website lists ” Al Akhbar (Lebanon), Al Masry Al Youm (Egypt), ARD (Germany), Associated Press (US), L’Espresso (Italy), Owni (France) and Publico.es (Spain)” as publications that will run stories based on the leaked emails “over the next two months.”  However, the Huffington Post’s Michael Calderone reported that the AP is no longer being named as a “collaborator” with WikiLeaks.

Calderone quoted the AP spokesperson Paul Colford as saying the AP “did not have any advance agreement on how we might handle the material.”  Added Colford: “To state that AP was ‘collaborating’ with WikiLeaks was a mistake.”

Previous leaks, such as the leaks of U.S. diplomatic cables, have seen news outlets like The New York Times, the Guardian, Le Monde and El Pais getting an advance peek.

The Associated Press noted that WikiLeaks hasn’t identified the source of the e-mails, but noted that over the past six months, news outlets including the Guardian and the Telegraph have been publishing leaked e-mails from Syria.

See here on the Guardian’s website a video of the WikiLeaks press conference about the emails.

As we wrote mid-June, WikiLeaks’ Assange is appealing to Ecuador for political asylum and is currently in the Ecuadorian embassy in London.  Separately, Assange is also calling for news outlets to correct inaccurate reporting about him.