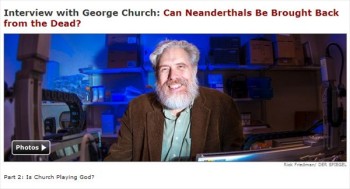 See above a screenshot from the Der Spiegel interview that launched many misleading and false stories. (Credit: Der Spiegel, screenshot)

The sensational quotes and reports claimed that Church was looking for a woman to serve as a surrogate to carry a Neanderthal baby.  Church did give an interview to German publication Der Spiegel discussing, in part, the possibilities of cloning Neanderthals.

But, oddly, news outlets including the UK Telegraph published quotes that didn’t appear in the English-language version of the interview and attributed them to Der Spiegel.  Church told iMediaEthics that this case of the media misrepresenting his words is a “litmus test as to which news providers check their sources.”

“If someone is keeping score, how many readers would change their media source?” Church asked.

For example, the UK Telegraph, Fox News and Australia’s News.com.au all published quotes that Church identified as “fabricated.”  The fake quotes are:

“Neither of these is an actual quote, despite quotation marks and the word ‘I,'” Church told iMediaEthics by email. “I have never ‘attracted’ nor ‘extracted’ DNA from any fossil bones.”

As a possible explanation for the fabrication, Church proposed that his real comments — which he said were accurately reflected in the English language version of the Der Spiegel interview — were lost in translation by other news outlets.  “The English Spiegel interview online was basically correct,” but “non-Spiegel agencies, possibly ignoring the original English interview” —  picked up his comments in the German version of the article, then translated them to English and botched the quotes, Church suggested.

iMediaEthics asked Der Spiegel about the phony quotes. Der Spiegel’s Johann Grolle, who conducted the much reported on interview with Church, commented on the fabriaction and questioned how media outlets could get it so wrong:

“We did in fact realize that these false quotes are circulating. You will have realized yourself that in our interview George Church does not say anything even very similar to what he is supposed to say in those quotes. I have some trouble to imagine, how anybody could mistranslate this in such a distorting way. But I have to admit that I have no clue how else they might have arisen.”

Grolle noted that not only did media outlets not verify the quotes by checking them against the interview transcript, but also that media outlets weren’t checking with Der Spiegel:

He also pointed to Der Spiegel’s blog in German and English about the “media hype” surrounding its interview.  In that blog, Der Spiegel wrote that it’s “sorry that Church…has now become the victim of media hype.”

“In this case, the entire brouhaha had nothing to do with any incorrect translation,” the blog reads. “And it is important to us to communicate this because we make a significant effort to ensure that our stories are correctly translated when they appear on our English-language website. Occasionally mistakes slip through — as is inevitable with any site that relies heavily on translation — but when they do we are quick to correct them.”

Further, Der Spiegel argued that the inaccurate suggestions of a “want ad” could have been countered by a “critical read,” writing: “Church didn’t mean it that way and we didn’t understand it to mean that either.”

The Telegraph’s Jan. 20 story, “I can create Neanderthal baby, I just need willing woman,” by its Medical Editor Rebecca Smith, used both quotes, attributing them to the Der Spiegel interview.  See below a screenshot of the article.

Fox News’ story on Church’s interview reported that “Church did not respond to FoxNews.com requests to confirm the Spiegel Online story” and included the false quote “I can create a Neanderthal baby, if I can find a willing woman.” iMediaEthics has asked Church for confirmation that FoxNews.com reached out to fact check and will update with any response..

“The phrase ‘adventurous female human could serve as’ came from an article by Ed Regis in Discover Magazine in 2010 and was recycled in the book Regenesis. This was altered to sound like a ‘Wanted’ Ad.”

(Regenesis: How Synthetic Biology Will Reinvent Nature and Ourselves is Church’s latest book, co-written with Ed Regis.)

iMediaEthics asked Church how he learned of the errors.  “It is still hard to hunt down the sources of the errors since very few news items cite the (primary nor secondary) sources for their quotes,” he wrote.

UPDATE: 1/27/2013: 10:57 AM EST: Church confirmed that Fox News did seek comment from him on MLK day, and that he responded at the end of the day. He also pointed out that Fox News could have simply checked the interview transcript to verify as well. Church wrote:

“Yes.  I received one email from them at 9:50 AM 21-Jan and I responded by 5:55 PM that day.  Possibly other attempts were made via my staff.   My staff and I were observing MLK day and the inauguration.  By afternoon the number of emails was quite large.  The key point is that If they wanted my words they could have found the 18-Jan SPIEGEL English interview online. Many other journalists got similar response times from me and managed to get the story right first time  (e.g. Herald, Globe, Forbes).”