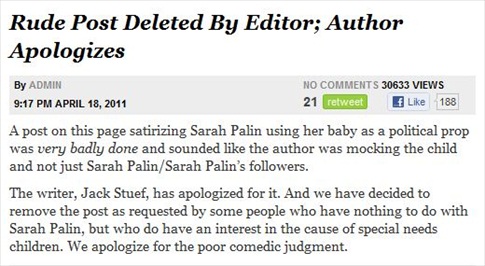 Wonkette retracted and apologized for its post that was viewed as mocking Trig Palin, who is 3 years old and has Down syndrome.(Credit: Wonkette, screenshot)

The blog Wonkette retracted and apologized for a “rude” and “very badly done” post by its writer Jack Stuef that made fun of Sarah Palin’s son Trig, age 3, who has Down syndrome.

At first Wonkette defended the post save one comment, but ultimately the site pulled the content — just not before some advertisers reportedly said they’d stop advertising on the site.

“The writer, Jack Stuef, has apologized for it. And we have decided to remove the post as requested by some people who have nothing to do with Sarah Palin, but who do have an interest in the cause of special needs children. We apologize for the poor comedic judgment.”

As EditorsWeblog described the post, Stuef “made jokes and comments” about Trig Palin and made comments like “What’s he dreaming about? Nothing. He’s retarded.”

Wonkette also put Stuef on probation, but AdWeek suggested that probation may not be what most people think of as probation. Wonkette’s editor Layne wrote to AdWeek that Stuef “accepts full responsibility for his actions” and has “comment duty” because of his post.

Stuef’s post has been slammed by bloggers from Big Journalism to Mediaite to Slate and Fox News. And, “after a large and ongoing Twitter campaign, at least nine companies intended to stop advertising on” Wonkette including Coca Cola and Papa Johns.

In its criticism, Big Journalism featured a screenshot of the post and some of the comments from Stuef’s post.

And, apparently since Stuef’s post was published, Alaska Dispatch commented that the domain name for JackStuef.com has been bought.  It redirects to the National Down Syndrome Society.

Ad Week noted that Gawker’s owner Nick Denton, who also founded and later sold Wonkette, reportedly commented to AdWeek “I don’t believe we would have done that post.”

In an e-mail to AdWeek (and David Weigel, who was copied on the e-mail) before the post was removed, Wonkette’s editor Ken Layne commented that Sarah Palin “is the target of our disgust, because of what she does to that child.”

However, Layne did comment that Stuef “should not refer to the child as ‘retarded,’  even in a clearly over-the-top piece of political satire, because obviously the people who are going to act outraged about this are not going to be following the nuances of a notorious meta-humor website like Wonkette.”

Layne also criticized Palin’s parenting “parade my children around in the media” and commented that, going forward, Wonkette would “make it extra clear that *Palin* is the problem with America.”

“Trig is cool with us. Sarah Palin, on the other hand, is a grave danger to America,” according to Layne, who threw in criticism of Weigel.

Weigel responded that his “only problems with the post are the joking references to” Trig Palin.

iMediaEthics is writing to Wonkette and the National Down Syndrome Society for comment and will update with any response.