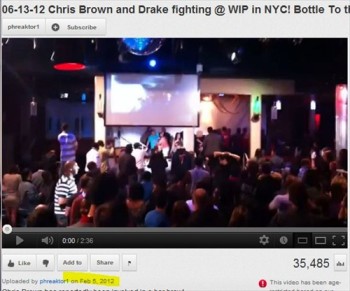 A re-posted version of this video, uploaded in February, has been posted by the NYDaily News and WPIX as of an alleged June incident. (Credit: YouTube, screenshot, highlight added)

The New York Daily News and New York TV news WPIX-11 published fake videos purporting to be of the alleged “bar brawl” between Chris Brown and Drake this past week.

Gossip Cop previously debunked the video as footage of an “OLD and UNRELATED clip of some other fight” from earlier this year.

According to YouTube’s upload date on the video from “phreaktor1,” the video was uploaded February 5. Another user, “takecareofficial,” appeared to have re-uploaded the same video June 14, added the tag “REAL VIDEO MUST SEE” and  passed it off as new.  See below screenshots of the two videos, with the upload dates highlighted.

The above and below video are the same length and of the same incident. Apparently the video, uploaded once in February, was re-uploaded and posted this week as if it were current. (Credit: YouTube, screenshot)

See above the same video appeared to be re-posted on June 14.

Gossip Cop noted earlier that the fake video was published by Hollywood Life, but iMediaEthics spotted it on the Daily News’ and WPIX’s websites on June 15.

WPIX had reported on and included the video in a TV segment, which the Daily News re-published on more than one article.  The WPIX segment on the Daily News website, reported by Jay Dow, identifies the alleged fight footage as an “amateur video posted to YouTube.”

In WPIX’s case, the YouTube video is simply posted at the bottom of a June 14 WPIX web article.  The video WPIX posted is the apparently re-uploaded video posted on YouTube by “takecareofficial” on June 14.

We have written to WPIX and the Daily News’ Joe Kemp, who shared a byline on the June 15 Daily News story, asking if they will correct and how they verified the video’s authenticity. We will update with any response.

We wrote in April about another one of Kemp’s stories for the Daily News.  In that case, Kemp shared a byline with two other reporters for a story about a kidnapped bunny.  The report on the bunny, that was later returned to police and its rightful owner, also featured anonymous sourcing.  We wrote to Kemp at the time asking about the anonymous sourcing and resources of three reporters on a story about a rabbit, but never heard back.