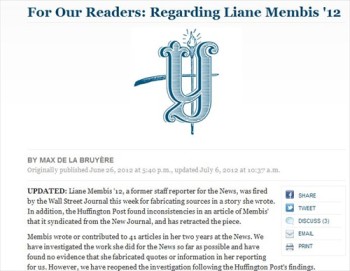 As we wrote, The Wall Street Journal added editor’s notes to intern Liane Membis’s work explaining that names and quotes in her stories were fake.

Membis had one post published on The Huffington Post, including an Aug. 27, 2011 story, “Life after Yale: Undocumented” on a “Yale graduate and illegal immigrant,” the Atlantic Wire noted.

That story now carries an editor’s note that reads:

The Atlantic Wire added that another publication that ran Membis’ work, the Yale Daily News, said in a June 26 statement that after a review of her 41 Daily News articles, it “found no evidence that she fabricated quotes or information in her reporting for us.”  But, on July 6, the Daily News announced “we have reopened the investigation following the Huffington Post’s findings.” We’ve written to the Daily News asking what this new review will include and will update with any response.

Interestingly a June 28 comment on that post, by “Yale12,” suggested that The New Journal and Huffington Post “look into that article she wrote about an undocumented Yale student. Her main source was anonymous – how much do you want to bet that she made up all or part of that, too?”

According to the Atlantic Wire’s Google cache search, The Huffington Post removed Membis’ article in question after that comment was posted on the Yale Daily News, sometime after July 2, although it still appears on The New Journal.

She also said “This is definitely something I’ve never done before,” which, in light of the recent Huffington Post statement on her writing, appears questionable.

We have written to The New Journal asking if it will review Membis’ article as well or if it has comment about the Huffington Post statement and will update with any response.