You thought you were having a difficult day? 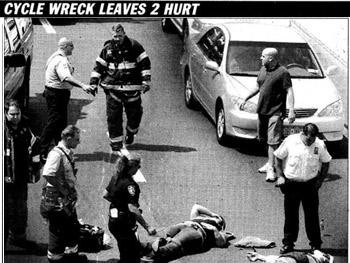 New York City, August 21, 2006: I called the FDNY and found out last night that it was Engine 326 that went to the scene of a motorcycle accident reported in yesterday’s New York Daily News, page 15. The headline by Anthony Delmundo above the photograph states, “Cycle Wreck Leaves 2 Hurt.” (See photo and caption below).

All right so far. There were two bodies in the photo shown with their downed motorcycle and a bevy of firefighters and cops. The caption states, “Rescuers tend to two men injured after the motorcycle they were riding crashed on the Long Island Expressway near Douglaston Parkway exit in Queens yesterday. Both were hospitalized.”

But wait. Look at the body of the “man” farthest away. The arm gesture and the fat distribution on this figure caught my eye. The shapes of the legs, hips, arms and a breast were, ahem, a dead giveaway. My quick call to FDNY confirmed what I had deduced — one woman and one man were involved in this motorcycle accident. The caption should have read “a man and a woman injured.”

This morning I called the Daily News Photo Editor, Michael Lipack, to inform him of yesterday’s error. “Oh,” he said with irritation when hearing about the mistake. I asked, “Are you going to run a correction?”  “Check the paper tomorrow,” he said flatly, rushing to return presumably to his caption and photo work.

You thought you were having a difficult day?