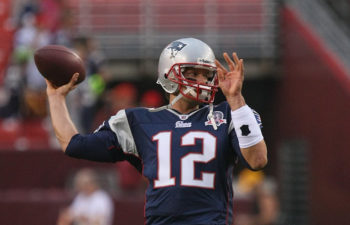 Is Tom Brady’s missing Super Bowl jersey really worth $500 million? Louisiana State University assistant professor of journalism Steve Bien-Aime saw an article saying so, but then the article vanished with no disclosure of the error. He asked iMediaEthics to take a look.

Houston NBC-affiliate KPRC-TV had wrongly reported in an online headline that Tom Brady’s Super Bowl jersey was worth the hefty half a billion price tag. The actual estimate is $500,000, according to a Houston Police Department report published online by TMZ.

iMediaEthics contacted the Houston Police Department to confirm the authenticity of the TMZ-published document. The department sent iMediaEthics a copy of the document, which shows the jersey is listed as an estimated value of $500,000.

However, KPRC replaced its original article with one featuring the correct estimation. iMediaEthics contacted KPRC/Click2Houston to ask more about the error. Its web editor Matt Aufdenspring told iMediaEthics by email that it “takes pride in accuracy, fairness and transparency.”

The original Feb. 21 news article by senior web editor Aaron Barker was headlined, “Tom Brady’s stolen Super Bowl jersey valued at $500 million.” The article itself correctly stated that the police report estimates the jersey is actually worth $500,000, not $500 million, as the headline wrongly stated. 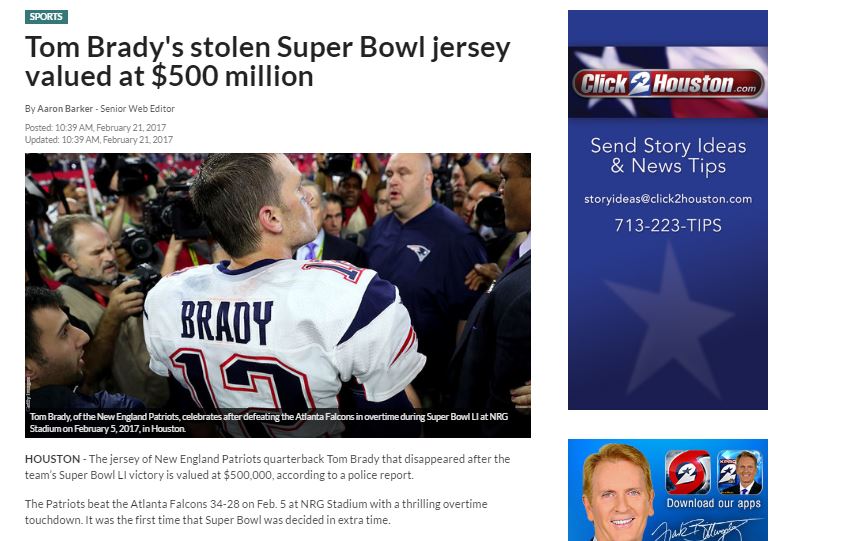 A screenshot of the original KPRC article.

The URL to the article now leads to an error page, suggesting that the station unpublished the article. 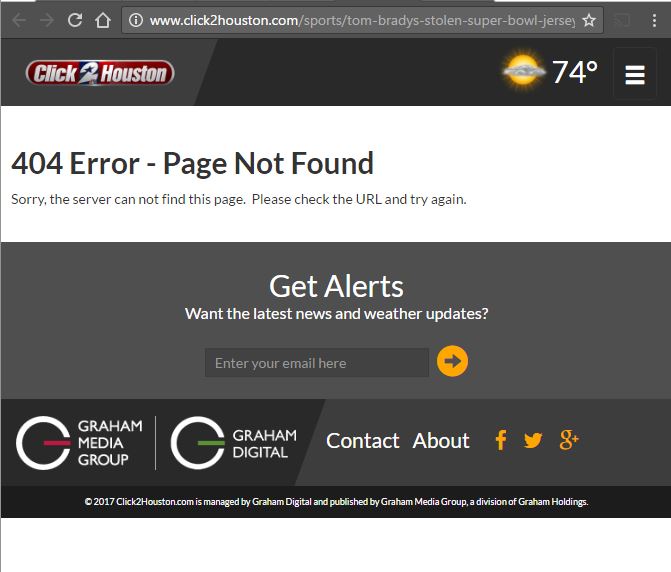 The old link with $500 million in the URL goes to an error page.

It appeared the station updated  the corrected article, with the new headline and URL to reflect “Tom Brady’s stolen Super Bowl jersey valued at $500,000.” Aufdenspring told iMediaEthics by e-mail the station’s digital team made a “mistake” and it “issued a correction immediately.” It published a correction in its email alert, he said.

However, there was no correction or disclosure to readers on the web article that the station originally erred.  “We did not unpublish the original article,” Aufdenspring told iMediaEthics. “Since the URL pulls from the headline of the article, once the corrected headline was published, it broke the link to the original version of the story, and was redirected to the new version of the article. There appeared to be an issue with the redirect, which is why you were seeing the 404 error.” Aufdenspring sent iMediaEthics a copy of the e-mail that was sent correcting the error. iMediaEthics asked him if the station will post a correction on the article itself, however he didn’t respond to our query.

While the station didn’t respond to our question about posting a correction, KPRC-TV did eventually post an editor’s note on its article about the error. It reads: “Editor’s Note: The original version of this story incorrectly stated the value of the jersey.”

After the publication of this article, KPRC news director David Strickland e-mailed iMediaEthics to emphasize the inaccurate headline was caught “instantly” and fixed within minutes. However, they did not post a correction on the article until after we e-mailed them. 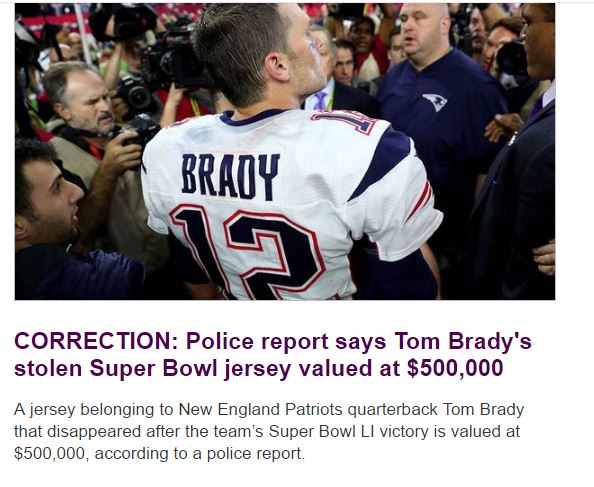 The e-mail correction sent by KPRC.

The headline claiming the jersey was worth $500 million still appears in Google searches.

Correction: The Super Bowl was Feb. 5, not Feb. 7. Also in one reference we referred to KPRC as a paper; it is a news station and website.