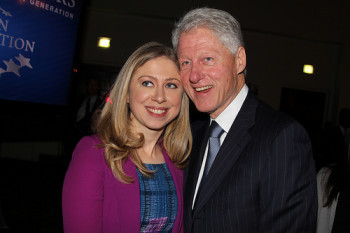 This week, Chelsea Clinton, the daughter of Bill and Hillary Clinton, announced she and her husband Marc Mezvinsky are expecting a baby and, in response, the media has devoted countless stories to the news.

A couple of news stories in particular grabbed iMediaEthics’ attention .

Philly.com’s story was headlined in bad taste, in iMediaEthics’ view.

Its April 17 story was titled, “Mezvinsky: I did have sex with that woman. Chelsea Clinton’s pregnant,” a play on Bill Clinton’s famous comment of Monica Lewinsky during a press conference, “I did not have sexual relations with that woman.”

The article was written by the Daily News’ Tattle columnist, Howard Gensler.

iMediaEthics asked Philly.com about the headline, noting we found it to be in poor taste. A Philly.com spokesperson sent iMediaEthics the following statement:

“You are well within your rights to see the headline in poor taste. I don’t see it that way. As a paper that is a tabloid and runs fun, often provocative headlines, I think this one is pretty mild.”

In USA Today’s article about the pregnancy, the following curious line was included: “It’s unclear how Chelsea’s pregnancy will affect Hillary Clinton, who is considering a race for president in 2016.”

This can’t be a real sentence in a real news story, can it? http://t.co/iEs8FQohSQ pic.twitter.com/FBMr91AKae

iMediaEthics searched Google for the sentence, which produces the USA Today story by Catalina Camia, which was published April 17 at 9:12 p.m. EDT.

The article now carries a note correcting an error in the story (although, the note is not labeled a correction.)

The note reads: “This story was updated to correctly reflect when Chelsea Clinton met her husband.”

Mediaite also wrote about the breathless coverage. Its story described “every media outlet” as reporting that the baby is “the most consequential baby since Jesus.”