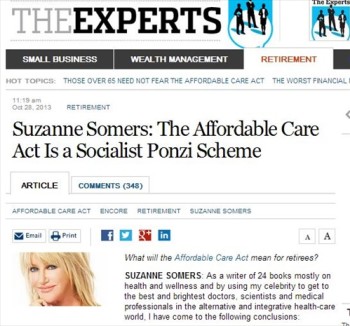 Actress Suzanne Somers wrote an article about health care for the Wall Street Journal.  But, the article, “The Affordable Care Act is a Socialist Ponzi Scheme,” included two fake quotes, and the Journal has had to post a long correction.

Oddly, Somers’ post was published under the Journal’s “Experts” section.  The errors in her article — and the fact that the Journal published an “error-ridden” article by her about health care — have gotten a lot of attention in the past day.

Somers’ Oct. 28 article said that the Affordable Care Act is “socialized medicine” and that “the word ‘affordable’ is a misnomer.”

She went on to describe an experience she said her sister-in-law had getting doctors appointments in Canada, and to call the Affordable Care Act “a greater Ponzi scheme than that pulled off by Bernie Madoff.”  She based her “conclusions” on her background: “a writer of 24 books mostly on health and wellness and by using my celebrity to get to the best and brightest doctor, scientists and medical professionals in the alternative and integrative health-care world.”

New York Magazine questioned Somer’s post, writing that it went “badly, badly awry” and pointing out that neither the Lenin or Churchill quotes appeared to be authentic.

The Baltimore Sun debunked the Lenin quote as fake after speaking to the “administrator of an online Lenin archive,” an “expert on Soviet socialized medicine,” and an author and “Princeton sociologist,” the Atlantic Wire noted.

And, New York Magazine explained how the Churchill quote was likely bogus:  “It’s almost certainly fake, too; it does not appear in the LexisNexis database or in Google,” according to the magazine. “Unless Somers has done original archival work on Churchill, she seems to have fabricated that quote on her own, or possibly received it via chain e-mail.”

The Wall Street Journal has since added a set of corrections, which read:

“Also, the cover of a Maclean’s magazine issue in 2008 showed a picture of a dog on an examining table with the headline “Your Dog Can Get Better Health Care Than You.” An earlier version of this post incorrectly said the photo showed and headline referred to a horse.”

Calling this incident “an embarrassment,” Columbia Journalism Review slammed the Journal for letting Somers weigh in on health care. “Let’s be very clear: The Wall Street Journal, of all places, shouldn’t be going anywhere near a dangerous crackpot like Suzanne Somers on the topic of health care,” CJR wrote.

iMediaEthics has written to the Journal for more information and will update with any response.