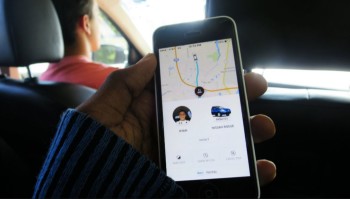 Arianna Huffington, editor-in-chief of the Huffington Post, announced this week she is joining the Board of Directors for Uber, the online transportation network.

Washington Post media columnist Erik Wemple commented that “this setup stinks,” asking “why this conflict exists in the first place.”

“Why does Huffington need to get involved with Uber? Is running the editorial operation of Huffington Post insufficient?” he asked. Gawker called the appointment “the gold medal in conflicts of interest.”

In a post at Huffington Post, Huffington said, “I’m very much looking forward to the opportunity to work within Uber to keep making our cities better places to live, move and work.” She noted that Huffington Post has previously worked with the company and said she is recusing herself from coverage of the company, writing:

“At HuffPost, we’ve partnered with Uber and Toyota, providing thousands of free late-night rides to college students for our campaign against drowsy driving. However, as HuffPost’s editor-in-chief, I have recused myself from any and all editorial coverage of Uber.”

Huffington Post will also include a disclosure on stories related to the car service or other ride-sharing companies that reads:

“Note: The Huffington Post’s Editor-in-Chief Arianna Huffington is a member of Uber’s board of directors, and has recused herself from any involvement in the site’s coverage of the company.”

“Huffington would not disclose how much she was being paid to serve on the board,” CNN reported.

At Poynter, Kelly McBride discussed Huffington’s decision, calling the move “highly unusual,” especially since the company “is in the news all the time” and Huffington is “a hands-on editor in chief.”

“This absolutely will cause audience members who know that Arianna sits on Uber’s board to doubt The Huffington Post’s independence when it comes to covering Uber,” McBride commented.

In addition to disclosures on all related stories, McBride recommended that Huffington appoint an editor “to be the chief decider on Uber stories and other stories involving ride-sharing and the great gig economy,” so Huffington herself isn’t involved and that Huffington tell the transportation company “she won’t leak newsworthy information.”

Dave Jamieson, a labor reporter for The Huffington Post, headlined an article about the controversial decision “Arianna Huffington Did Not Edit This Story About Uber,”  He wrote that editor Jo Confino will be in charge of coverage of the company.

Despite the promises that Huffington Post will still cover Uber fairly, Wemple at the Washington Post reported that executive features editor Gregory Beyer wrote in an e-mail earlier this month that it would pass on covering a negative story about the company “as we’re partnering with Uber on our drowsy driving campaign.” The Huffington Post told Wemple that Huffington found out about that decision after the fact and had Beyer apologize for giving “the wrong impression” and “the wrong message.”

.@Ryangrim correctly called my Uber email as a screwup. An email rightly criticized by my colleagues, who graciously accepted my apology.

That email doesn’t reflect HuffPost’s ethos, or my own.

“The day before [reporter] Digiulio’s note, Huffington and Uber chief executive Travis Kalanick jointly published a piece on Huffington Post titled ‘A Wake-Up Call to End Drowsy Driving.’ The piece outlined a partnership among the Huffington Post, Uber and Toyota ‘to raise awareness of the issue and help save lives.’ For this particular venture, Huffington pledged to do some miles. ‘If you’re interested in a sleep tutorial, order a ride with Uber and you could win a chance to have Arianna ride along with you,’ noted the piece. The arrangement was pegged to the launch of Huffington’s book, ‘The Sleep Revolution: Transforming Your Life, One Night at a Time,’ as well as to a college sleep tour for the Huffington Post.”

Wemple commented, “The brush-off received by Digiulio should end any fanciful thinking that somehow a news organization can cover the news with a conflicted boss.”