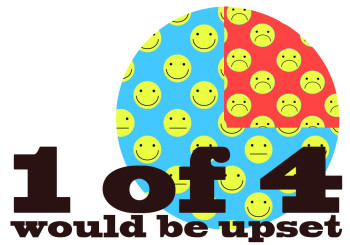 A new iMediaEthics poll finds few Americans upset that transgender people may use public restrooms based on their gender identity, rather than the biological sex that is indicated on their birth certificate.

Overall, only about a quarter of Americans, 27%, say they would be upset, while the rest either support transgender people, or don’t mind either way.

These results are based on a national telephone poll of 1,003 adults, conducted by Princeton Survey Research Associates International, May 5-8. [For more on the poll methods, see here]

The issue has become particularly newsworthy since North Carolina passed a law restricting use of public restrooms by transgender people, which the Department of Justice warned was a violation of the 1964 Civil Rights Act. This in turn prompted the North Carolina’s governor and legislature to sue the Department of Justice, which in turn is counter-suing.

The issue has also entered the presidential race, with Senator Ted Cruz supporting the North Carolina law before suspending his campaign. The iMediaEthics poll is one effort to gauge public opinion on the issue.

The poll asked half the sample a forced-choice question (Form A/B), and the other half sample a question that included a “don’t care” option (Form C/D). In both groups, respondents indicating a preference were then asked how upset they would be if the opposite happened to what they had just said.

Both ways of asking the question produced the same net results: Just about a quarter of Americans (27%) would be upset if transgender people are allowed to use restrooms based on the gender they identify with. The rest would not care, or would side with transgender people. 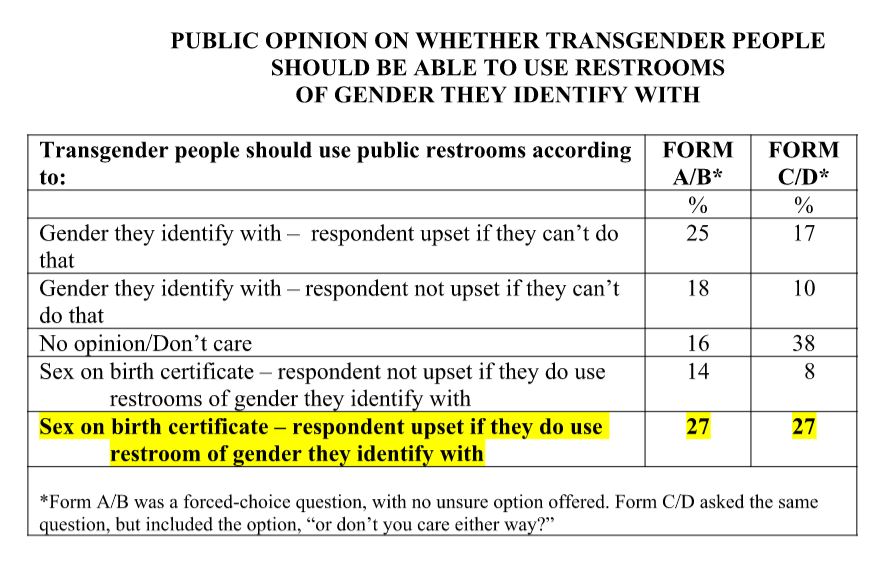 These results are similar to the latest CNN/ORC poll, which reports only 25% of Americans who “strongly favor” laws that restrict transgender people’s use of restrooms to their biological sex.

According to that poll, another 13% “somewhat” favor such restrictive laws, but it’s likely that this lukewarm inclination indicates such respondents would not be “upset” if such laws were not passed.

The iMediaEthics poll also shows a major partisan divide, with Republicans most likely to be upset if there are no restrictions on transgender use of restrooms (51%), while independents (24%) and Democrats (13%) are much less bothered.

iMediaEthics is continuing to analyze the results of this poll and will post further reports throughout the week.