3 Perjury Charges for former News of the World's Andy Coulson 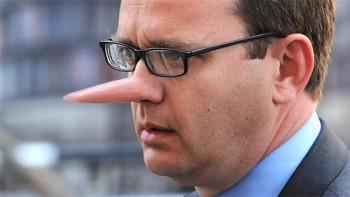 Andy Coulson, former editor of News of the World, has been charged with three counts of perjury.

Last month, Coulson was called to court in Scotland related to the charges. He was accused of lying during a 2010 court case there about phone hacking. During Scottish politician Tommy Sheridan’s perjury trial, Coulson said that he “had absolutely no knowledge” Sheridan was hacked, as iMediaEthics wrote.

In a Glasgow high court this week, Coulson was charged with three counts of phone hacking related to Sheridan’s perjury trial, The Guardian reported.  Coulson didn’t attend the hearing or enter a plea, according to the New York Times.

Because of the orders, the prosecution service said it can’t provide any comment about the case.

The three perjury charges in Scotland against Coulson stem from the following:

1. Coulson said “he did not know his royal editor Clive Goodman was involved in hacking, that he did not know payments were being made to Mulcaire for hacking and that he had not heard Mulcaire’s name prior to his arrest,” The Guardian reported.
2. He said there wasn’t a “culture” of phone hacking and that Goodman’s hacking was a “very unfortunate case.”
3. He said he didn’t know News of the World bribed police

Coulson was convicted of phone hacking in June. He was sentenced to 18 months in jail. He still faces a retrial for two counts of bribery over accusations he and Clive Goodman tried to pay police for a telephone book of royal family members. (The official charge in that case is “conspiracy  to commit misconduct in public office.”)

iMediaEthics has asked the UK Crown Prosecution Service if there is a trial date set for his retrial for the bribery charges.