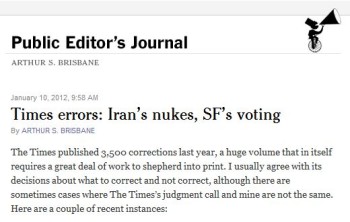 For the year 2011, the New York Times published 3,500 corrections, or about nine a day, according to public editor Arthur Brisbane’s latest blog post.

Brisbane noted that some corrections — or lack of corrections — have been debated by the Times, the public and himself. As such, Brisbane highlighted a couple of instances in which readers called for corrections that the Times rejected.  For example, he noted that readers questioned a Times report  in which the Times was accused of having “over-stated” a report on Iran and nuclear weapons.

As Brisbane noted, and we wrote in December, the same topic of Iran and nuclear weapons prompted 1,500 complaints to the Washington Post about that newspaper’s headline and sub-headline suggesting  Iran wanted nuclear weapons.  (Read our Dec. story on the Washington Post complaint, an advocacy group’s campaign for the correction, and Pexton’s report on the Post’s response here.)