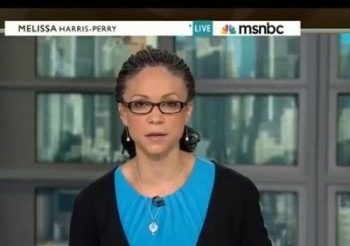 Melissa Harris-Perry has apologized yet again for comments her program aired about Romney’s adopted black grandson. Today’s Harris-Perry’s on-air apology was her third public statement about the Romney comments.

On her Dec. 29, 2013 program, host Harris-Perry showed a photo of Romney’s family and pointed out the black grandson, Kieran Romney.  Then guest Pia Glenn commented in part “one of these things is not like the others, one of these things just isn’t the same. And that little baby, front and center, would be the one.”

Harris-Perry then said she wanted the black grandson to marry Kanye West and Kim Kardashian’s daughter North West.  Another guest, Dean Obedeillah, commented that the photo “really sums up the diversity of the Republican party, the RNC. At the convention, they find the one black person.”

TIME reported that in the segment, titled “Look Back In Laughter,” the Sesame Street song “One Of These Things Is Not Like The Others” was sung by the whole guest panel.

CNN held a panel last week to discuss the issue. CNN’s Don Lemon said “They used the kid to mock Mitt Romney,” and noted that in the past couple of months two MSNBC hosts were axed over comments — Martin Bashir for his on-air remarks about Sarah Palin and Alec Baldwin for his off-air, but recorded and obtained by TMZ, insults to a Post photographer..

First, Harris-Perry apologized on Twitter “without reservation or qualification.” In tweets, she said, “I apologize to all families built on loving transracial adoptions who feel I degraded their lives or choices.”

I am sorry. Without reservation or qualification. I apologize to the Romney family. #MHPapology

I work by guiding principle that those who offend do not have the right to tell those they hurt that they r wrong for hurting. #MHPapology
— Melissa Harris-Perry (@MHarrisPerry) December 31, 2013

Therefore, while I meant no offense, I want to immediately apologize to the Romney family for hurting them. #MHPapology

I apologize to all families built on loving transracial adoptions who feel I degraded their lives or choices. #MHPapology

Harris-Perry also apologized on her MSNBC website. and posted her tweeted apologizes as well.

Then, today, on January 4, Harris-Perry apologized on air, noting that the discussion was “off-the-cuff” reaction to photos, The Wrap reported she said.

Harris-Perry added that she “identified with that picture” because of her background. Harris-Perry is a “black child born into a large white Mormon family,” the Huffington Post reported.

“Whatever the intent was the reality was that the segment proceeded in a way that was offensive,” she said.  The apology read, according to Mediaite:

“Allow me to apologize to other families formed through transracial adoption, because I am deeply sorry that we suggested that interracial families are in any way funny, or deserving of ridicule. On this program, we are dedicated to advocating for a wide diversity of families, it is one of our core principles. And I am reminded that when we do so, it must be with the utmost respect. We’re genuinely appreciative of everyone who offered serious criticisms of last Sunday’s program, and I am reminded that our fiercest critics can sometimes be our best teachers.”

She went on: “My intention was not malicious, but I broke the ground rule that families are off-limits. For that, I am sorry.”

Dean Obeidallah, one of the guests on the program, apologized for any offense, saying he didn’t mean “to mock the Romney family or the baby they adopted.”

Obeidallah also apologized on The Daily Beast for his remarks, noting that he didn’t “criticize the Romney family for adopting the baby nor did I mock baby Kieran in any way. Nor would I.”

“My joke was about the lack of racial diversity we see at the Republican National Convention—a topic lampooned for years by comedians. Little tip to GOP: If you can fit the name of all black leaders in your party in one tweet, you aren’t racially diverse.”