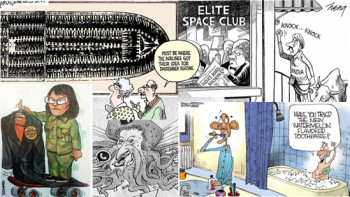 This year, questions about the ethics of cartoons have gained more attention.  From questions about why women in a real-life scenario were drawn as men to a retraction of a Gaza cartoon, iMediaEthics has covered numerous cartoon-related ethics stories.

Below, check out five of the most controversial cartoons we’ve covered this year.

“It compared a slave ship packed tight with human beings brought to America for a life of forced servitude with the discomfort of airline seating,” the paper’s president and executive editor said in an apology statement.

The newspaper received “dozens of complaints,” its editor Barb Roda told iMediaEthics in September.  The cartoonist, Robert Ariail, told iMediaEthics that he didn’t “mean to trivialize slavery” and apologized for the offense.

Just before the Toronto mayoral election, the conservative Toronto Sun ran a cartoon showing candidate-at-the-time Olivia Chow, who moved to Canada from Hong Kong as a teenager.

Chow slammed the cartoon as “disgusting” and “racist and sexist.” It showed Chow with slanted eyes and glasses wearing clothing in the style of Chairman Mao. Adding insult to injury, the cartoon had her standing on the literal coattails of her deceased husband politician JAck Layton.

Chow said in response to the cartoon:

“Because I am Chinese-Canadian, I must be a communist and have slanted eyes and glasses … and since I am a woman, I must be inferior and therefore not good enough for the job of the mayor so I must rely on my deceased husband. So it is both racist and sexist.”

In September, the New York Times got complaints from readers over a cartoon showing a mustached, turban-wearing man with the word India on his shirt knocking on the door to the “Elite Space Club.” The man was holding a cow on a leash as he knocked on the door.

The cartoon was in response to the  news India recently ran a mission to Mars.

Reader complained the cartoon was insensitive and racist to India. Times editorial page editor Andrew Rosenthal apologized in a Facebook post defending the cartoon as “provocative” but denying the cartoonist was “trying to impugn India, its government or its citizens.”

That said, Rosenthal wrote, “We apologize to readers who were offended by the choice of images in this cartoon.”

A German cartoon of Facebook’s Mark Zuckerberg drew complaints of anti-semitism and “Nazi propaganda” as iMediaEthics wrote in February.

The Simon Wiesenthal Center’s Associate Dean Rabbi Abraham Cooper told iMediaEthics that the cartoon was “an absolute outrage” and a “failure” by the newspaper.

He explained that Nazi propaganda often used octopi as an “emotional shorthand.”

The Boston Herald in October got into trouble for a controversial cartoon of President Barack Obama being asked about watermelon toothpaste.

The month previous, a man named Omar Gonzalez got past security and made it to the East Room of the White House. The cartoon was supposed to play off of the security breaches by showing Obama brushing his teeth and a man in his bathtub asking “Have you tried the new watermelon flavored toothpaste?”

Watermelon is linked to African Americans in an old racist slur, as iMediaEthics wrote.

In fact, the cartoonist, Jerry Holbert, edited his cartoon for national syndication to change the toothpaste flavor to raspberry. But he didn’t tell the Herald, which came under fire for running the cartoon with the watermelon reference.