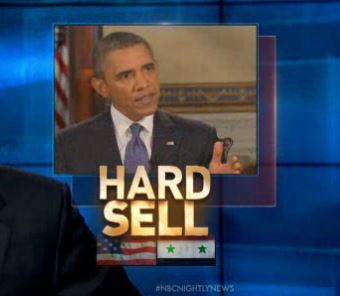 Seven polls were published on Monday, Sept. 9 about the proposed air strikes against Syria. The polls were sponsored by Pew/USA Today, CNN/ORC, ABC/Washington Post, Associated Press, Gallup, Reuters/Ipsos, and McClatchy/Marist.

The results suggest a public that is overwhelmingly opposed to President Obama’s desire to conduct punitive air strikes against Syria for its alleged use of chemical weapons on its own people.

While the wording of the questions vary somewhat, the graph below makes it clear that many more people oppose rather than support the air strikes.

Despite the widespread opposition, on Tuesday evening the president is scheduled to make his case for the air strikes in a nationally televised speech to the American people. He does not expect to convert a majority of the public to his point of view, he told Gwen Ifill on PBS News Hour Monday evening, but he said he hopes he can convince members of Congress to support his effort anyway.

Several of the polls suggest that in the past week, public opposition has increased, despite the push from the Obama administration in favor of military action. So, does Obama have any realistic chance of changing the public’s mind?

Definitely not, according to Ipsos pollster Julia Clark, as reported by Reuters: “There is never going to be a majority shift for intervention…The margin (opposing involvement in Syria) is just too large.”

On News Hour, Mike Dimock of Pew was more cautious. He pointed to Pew’s poll numbers, showing that:

These results suggest the president has at least a slim opening to make his case.

When measuring intensity of opinion on the issue, Pew and the ABC/WP polls both suggest about three-to-one opposition among those who feel strongly: Pew shows 45% strongly opposed, only 16% strongly in favor; ABC/WP reports comparable figures of 44% to 14%.

While these results suggest a much more intensely opposed faction than a supportive one, they also reveal that about four in ten Americans don’t feel strongly about the issue – and presumably would be most likely to consider the president’s arguments.

A CNN question suggests a somewhat larger percentage of an unengaged public. When asked whether they would be more likely to support their congressional representative if that person voted for, or if that person voted against, using military force against Syria, 57% of Americans said it would make no difference how their congressional representative voted.

The president has the bully pulpit with his ability to address the country on national television. But the poll results point to how difficult it will be to overcome public resistance to taking military action against Syria.