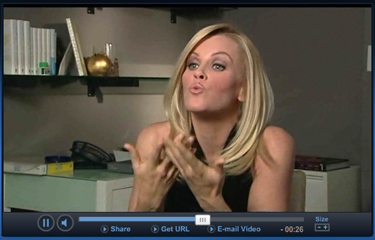 A recent ABC News broadcast offers a stark example of how bad the problem of false balance in science reporting can be. The short segment, on a scientific study of autism and gastrointestinal disorders, features a single guest who has no scientific training – actor Jenny McCarthy.

David Wheelan at Forbes.com asks, “Is this responsible science journalism on ABC’s part?”

The study, a review of the scientific literature on autism, assessed the current scientific literature on Autism Spectrum Disorders (ASD), and concluded from the full body of evidence that, so far, there is no good evidence that autism involves a gastrointestinal aspect. The exact words of the study read, “The existence of a gastrointestinal disturbance specific to persons with ASDs (eg, “autistic enterocolitis”) has not been established.”

Composed of “28 experts in child psychiatry, developmental pediatrics, epidemiology, medical genetics, immunology, nursing, pediatric allergy, pediatric gastroenterology, pediatric pain, pediatric neurology, pediatric nutrition, and psychology,” the group also found there is no evidence to suggest that restricted diets benefit autism sufferers as a rule, though they of course may benefit certain individuals (as they do some individuals without autism).

ABC News took the appropriate step of seeking comment on the study from an outside source, a journalist need not always include such comment, but when reporting on science it is always responsible to provide sources to allow for the public to understand the context of a specific study.

It was not appropriate or ethical, however, for ABC News to seek comment from McCarthy, especially without explaining that she has been shown to be an unreliable source of autism information. At the very least, if the network wanted to use McCarthy, her words would need to be responded to by a knowledgeable scientist experienced in the collected scientific evidence on autism.

In fact, ABC News allowed McCarthy to speak unchallenged for the majority of their extremely brief segment. “We’re the ones seeing the real results,” the actress says, arguing that “doctors” need to “start listening to our anecdotal evidence.”

McCarthy’s arguments mislead and misunderstand the science at stake. First of all, as Phil Plait points out on his blog BadAstronomy, McCarthy’s call for doctors to “start listening” to her anecdotal evidence makes no sense, when it looks like that’s exactly what they’ve already done with this study. “Scientists did take the anecdotes seriously. That’s why they investigated any possible links between GI disorders, diets, and autism. What they found was that there is no link,” Plait writes.

Second of all, McCarthy does not seem to understand the difference between anecdotal and scientific evidence. She says she has seen the “real results.” But offers no explanation of why her anecdotal experience is a “real” result, while a scientific review of evidence is not “real.” Actually, anecdotes are a notoriously unreliable form of evidence. The human brain tends to see patterns where none exist and consistently mistakes chance for coincidence.

ABC published a print story on the finding (which does a much better job than this one-minute video) explaining the science and its scope. The study does not say autistic children don’t ever have gastrointestinal problems, or that diets are always useless. It says that so far the evidence shows no link. More interestingly, the study makes suggestions for doctors treating autistic patients on how to look for and deal with gastrointestinal problems that may arise–a valuable tool and one that might actually help autism sufferers.

So why add this response from McCarthy? McCarthy is associated with two organizations (TACA, Talk About Curing Autism; and Generation Rescue) that publish a range of factually incorrect, and potentially dangerous, material, including suggesting or implying that vaccines can cause autism and that “chelation” therapy–a chemical treatment to remove metal from the body–is a potentially effective treatment for autism, two claims that have no reliable scientific evidence to support them. (For more about hard science on Autism, check out this StinkyJournalism post.)

A science clip on autism should no more use McCarthy as an unchallenged source, than a story on HIV should feature a response from someone who denies the reality of HIV infection as the cause of AIDS without a scientific basis. Doing so disregards and dilutes the facts that should be at the heart of any ethical piece of science journalism.