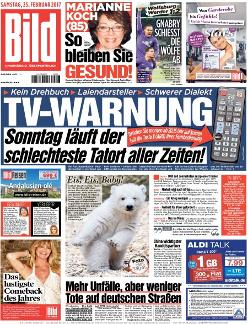 Bild, Germany’s most read daily newspaper, fell for a fake story about a mob of migrants committing sexual assaults and publicly apologized this month. Now, the newspaper has appointed an ombudsman, Ernest Elitz, to handle complaints.

The move to hire an ombudsman often comes after a scandal. The New York Times appointed an ombudsman after the Jayson Blair scandal to provide readers an independent voice and represent their concerns.

In recent years, the number of ombudsman at U.S. publications has shrunk. Earlier this year, the Kansas City Star‘s longtime ombudsman left the position, effectively ending the role. The Washington Post ended its ombudsman role back in 2013. On the other hand, last year, the Honolulu Civil Beat hired a readers representative, and earlier this year, the University of Toronto’s newspaper The Varsity appointed its first public editor.

iMediaEthics has contacted the Organization of News Ombudsmen for comment on the Bild appointment and its role in the global ombudsman mediascape.

Bild is also setting up a team to look at issues relating to fake news.

On its website Feb. 21, Bild announced announced Elitz as “your contact at Bild – if you have questions or doubts or do not feel represented,” according to Google Translate.

“We want you to be heard by us if you are annoyed about us or see something wrong. We want you not only to trust our facts, but to translate them transparently. We want to hear from you if you think you have discovered an error.”

They went on to say they won’t “influence [Elitz’s] judgement.”

iMediaEthics has contacted Reichelt and Koch for more information about how the role is set up. Elitz told iMediaEthics by e-mail March 6 that he will publish reports weekly and starts his position now. He will report to Bild’s editor-in-chief.

“We know that we have to rebuild your confidence every day,” the Bild editors wrote. “Even mistakes happen with us. Any mistake is one too much. But when they happen, we stand by. We give our best every day to ensure that you are well informed and reliable in this particular year 2017. We promise you that.”

In mid-February, Bild admitted its article reporting that dozens of migrants assaulted women in Frankfurt on New Year’s Eve was fake, iMediaEthics reported. The police investigated after the Bild story and not only found no evidence, but found that one of the alleged witnesses wasn’t even in town that night.