AIDS Denialism Coddled And "Debated" In The Spectator

AIDS Denialism Coddled And “Debated” In The Spectator 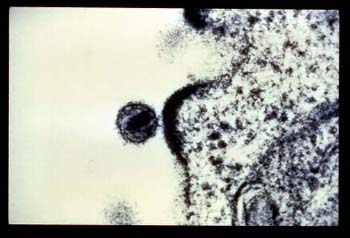 IT'S REAL: This image shows HIV "budding" out of T-cell. UK magazine the Spectator recently wrote a piece calling for a 'debate' on the existence of HIV/AIDS, even though that existence has been overwhelmingly demonstrated by science. (Credit: NIH)

We’ve written before about the potential harm done when the media report shallowly on medical issues, quote “experts” who aren’t, or give false balance and fluff treatment to sources whose health arguments are unfounded or even dangerous.

Now a particularly scary example of this bad journalism has been pointed out in the British magazine The Spectator, which recently scheduled and then cancelled a debate on a film that mistakenly and dangerously questions the existence of HIV. The Spectator is a publication with an admittedly conservative editorial line. But though opinionated, the magazine still has a responsibility to not endanger the health of its readers.

In his column/blog, BadScience, Dr. Ben Goldacre criticizes The Spectator for even suggesting this debate and Spectator editor Fraser Nelson for writing an irresponsible and misleading notice about the film, “House Of Numbers.”

“It’s not ‘controversial’, it’s pointlessly misleading,” Goldacre writes. “’Starting a debate’ is fine. With this film, and with these panelists, The Spectator has framed a very odd event indeed.”

On the film itself,  “It would take two months of columns to address all the bogus claims of this film,” Goldacre wrote in his column in UK newspaper The Guardian on September 26.  “Eighteen doctors and scientists interviewed for the film have issued a statement saying that the director was ‘deceptive’ in his interactions with them, that it perpetuates pseudoscience and myths, and that they were selectively quoted to make it seem as if they are in disagreement and disarray, when in fact they agree on all the important facts,” he writes.

The Spectator initially scheduled a debate on the film featuring a “balanced” mix of experts, but then cancelled, reporting in their cancellation that it was because too many panelists had dropped out. A satirical comment on Goldacre’s post of this letter by commenter Chris Hunt points out the silliness of even expecting scientists to agree to engage in such a ‘debate’:

I’ve had to cancel my forthcoming symposium: “The Earth, spherical or banana-shaped?” for similar reasons. Why can’t these so-called scientists handle a balanced debate on the issue?

Goldacre writes with restraint that he’s not against the idea of debate in and of itself.  The issue here is two-fold. 1) That science has demonstrated beyond a shadow of a doubt that HIV causes AIDS, and therefore the issue is largely unfit for debate; and 2) That the Guardian named a panel of debaters which doesn’t at all reflect the balance of opinions among scientists on HIV and AIDS.  Such a debate would only give false weight to the views of people who are either not experts or have already been discredited in their denialism.

“What kind of debate will the Spectator be hosting?” Goldacre asked in his response to the Spectator’s announcement. “They advertise a panel of ‘leading medical authorities’,” he writes.

Charles Geshekter is a professor of African history from the University of Chicago, and is therefore also not a “leading medical authority”. He says there is no AIDS epidemic in Africa, simply poverty, and that belief in the epidemic was a product of racism and “western sexual stereotypes”. In fact he calls it “The Plague That Isn’t”, and was on President Thabo Mbeki’s notorious AIDS Advisory Panel in South Africa in 2000.

Beverly Griffin is an emeritus professor at Imperial College, from the field of virology but not HIV, who is quoted by the virusmyth website as saying that HIV may not cause AIDS in the 1990s. Her views may now have changed, I hope they have, I have emailed her and hope to hear back.

Lastly, Dr Joe Sonnabend is a retired American doctor who was greatly involved in the treatment of people with AIDS, but was also long regarded by many in the AIDS denialist community as a fellow traveller, saying that the link between HIV and AIDS was unproven. More recently he has distanced himself from this view.

Goldacre argues that the Spectator was clearly misguided in amassing this “debate”, and that Fraser Nelson was negligent in writing about the film in the way he does. In The Spectator, Nelson writes:

The film picked up awards at various American film festivals, but has since been denounced as backing AIDS denialism. Yet the footage shows Luc Montagnier – who won a Nobel prize last year for his work on AIDS – saying that many HIV infections can be shrugged off by a healthy immune system.

If this is true, isn’t it worth exploring? Isn’t this argument worth having? Should we be screening a documentary like this at all? Let’s have your thoughts.

The rules of ethical journalism mandate that journalists check facts and vet factual statements by their sources. Nelson does not do this in the passage above. And his negligence has the potential to mislead his readers into thinking there is a controversy here when there is none.

Not having the space to describe all the film’s flaws in a short column, Goldacre points readers toward a scientifically accurate site, Aidstruth.org.

In a final, somewhat exasperated call to Nelson to check his facts, Goldacre concludes:

I would however ask Fraser about one scene, which makes a very simple point. Christine Maggiore appears many times in the film, talking emotively, explaining her choice not to take AIDS medication, and that this is why she is alive.

Christine Maggiore is dead, Fraser. The film tells you that but in tiny letters at the very end and it says no more. She died of pneumonia aged 52. And her daughter died of untreated AIDS aged 3. Because of her beliefs about AIDS, Christine Maggiore did not take medication which has been proven to reduce the risk of HIV transmission to her unborn child during pregnancy. Her daughter, Eliza Jane, was not tested for HIV during her short life. Before she died. Of AIDS.

I cannot see how a film which does not tell you that – in large, bold letters, perhaps, scrolling across the screen when Maggiore is speaking to you so passionately – how a film that frames its facts in such a fashion can possibly be a helpful starting point for an informed debate.

AIDS Denialism Coddled And “Debated” In The Spectator