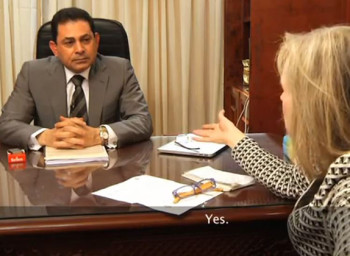 FARAG FATHY FARAG, LAWYER, CAIRO: I knew that the Central Bank of Egypt blocked transfers coming from Qatar to any person—any person.

Stopped all transactions and transfers—everything.

They told me they wanted to transfer money using my account to finance the business they have.

I thought this money is for their employees working here and taking salaries, so I told them I don’t mind as long as it is official.

They transferred a million and a half dollars to my account and I was surprised that they want me to pay these people in cash.

They wanted to send people to my office for me to pay them. This is a crime.

I refused and I gave them two choices—either I return the money or I issue a bank check for every payment to prove to the government that this money was paid in an official direction, or I will be participating in a crime.

When they couldn’t find a solution for this problem, they told me that we have to pay $10 million in taxes, so I signed a bank check for the taxes.

They get their money now in illegal ways and it’s none of my business.

RHONDA ROLAND SHEARER:  So, you’re saying this returning of the million and a half

SHEARER:  That this is something that you haven’t yet revealed to the media. But obviously that puts you in peril. This must have been quite a shock.

FARAG: No no, not exactly.

I discovered that those million and a half dollars are not for the salaries as they told me.

I learned that they give it monthly, to people to make demonstrations.

SHEARER: Yeah and you take an oath to not—

SHEARER: You keep people out of jail.

FARAG: (laughing) Yes, yes. Again, I…. the government, the Egyptian government will ask me if I am partner in crimes. This is the law.
END

Who is Farag Fathy Farag?

Farag is the CEO of Farag Law Firm based in Cairo, Egpyt. He is a high-profile criminal law and corporate lawyer in Egypt and the Middle East who represented imprisoned Al Jazeera journalists Peter Greste, Mohamed Fahmy, and Baher Mohamed until quitting in court this year. Farag helped the international channel attain its broadcasting license in Egypt in 2011 before its cancellation by the Egyptian Court in 2013.

Clients include major banks, airlines, gas and oil companies, and media outlets. He attended Cairo University for a Faculty of Law, LLB and a Criminal Law, LLM.

Editor’s Note: Learn more about the charges Farag levied in iMediaEthics’ investigative report. Al Jazeera’s lawyer in New York, Frank W. Ryan of DLA Piper, wrote in a Sept. 25 letter to iMediaEthics that “any allegations” Farag made “are false”. Ryan provided no evidence to support this sweeping statement and declined to respond to follow-up questions. Egypt, by contrast, is taking these revelations seriously. The International Cooperation Office of the Egyptian Prosecutor General confirmed by email to iMediaEthics that “the Egyptian Prosecutor General will verify allegations by Mr. Farag by judicial investigation.”

This video transcript is part of iMediaEthics’ investigative series on international media reporting on Egypt.

iMediaEthics’ editor-in-chief and publisher, Rhonda Roland Shearer, spent much of May and June in Egypt reporting for this series. She worked with Nader Gohar and his CNC team to produce video reports for iMediaEthics .