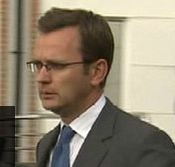 Andy Coulson, former communications director for the British prime minister, has filed a lawsuit against News Group Newspapers, which published the now-closed News of the World and is a part of News International, the Metro reported.

According to the Metro, Coulson claims that News Group Newspapers would “pay his legal bills,” but it’s not.  Coulson is a former News of the World editor who resigned amidst the 2007 phone hacking charges. He was named UK Prime Minister David Cameron’s communications director in 2007 and resigned in January of this year because of renewed phone hacking charges against the newspaper.

Coulson was still paid by News International while he was working for Cameron as a result of a multi-year severance package.

The Metro noted that Coulson was arrested three months ago to be questioned. The UK Press Association explained that Coulson’s arrest in July was ‘on suspicion of corruption and phone hacking.’

According to the Financial Times, Coulson “is on bail to return to a police station in London next month.”

As the Press Association reported, Prime Minister David Cameron stated that if Coulson, who has consistently denied being involved in hacking, does end up being implicated Cameron “would make a ‘profound apology.'”

The Wall Street Journal, which is owned by News Corp., explained that during the July testimony of former News International CEO Rebekah Brooks to Parliament, Brooks disclosed that the company “had been paying at least some of Mr. Coulson’s legal fees.”

During his July 19 testimony, Rupert Murdoch’s son James Murdoch told Parliament that the company was paying the fees of former News of the World private investigator Glenn Mulcaire, who has admitted to hacking phones for the newspaper during the time Coulson was editor. As iMediaEthics has written, Murdoch told Parliament the company would cease payment, which it did.  Muclaire filed a lawsuit in August to get the fees paid again.