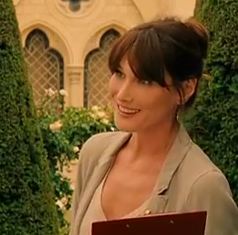 See above a screenshot of Carla Bruni-Sarkozy in a clip of 'Midnight in Paris' (Credit: YouTube, "thedigitalfixuk," screenshot)

Despite the Associated Press’ initial Feb. 13 story, a “planned statue in a Paris suburb that is to be modeled after French first lady Carla Bruni-Sarkozy” will only likely cost €81,000, according to the AP’s correction the same day.

The AP originally had reported that the status would cost €81 million. Whoops!  A Feb. 13 story by the AP published in the Sun Herald reported on the criticism of the pricy statue.