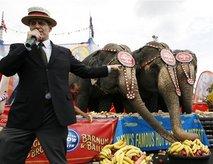 It was a shameless publicity stunt and cross-marketing bonanza. The problem was Associated Press went along for ride (or should I say web clicks?).

The Major League Eating and Ringling Bros.and Barnum & Bailey circus–three elephants vs. three humans–hot dog bun-eating contest was covered by AP as if it were legitimate news. I mean, was there ever any doubt of who would win?

AP’s lede reads like a press release: “In the fight of pachyderms vs. people – the pachyderms now have the upper trunk. Three circus elephants scored a decisive victory over three human competitive eaters at a cross-species eating contest Friday, chomping down on 505 hot dog buns in six minutes. The humans forced down only 143 buns in the bout at Brooklyn’s Coney Island.”

The AP’s eight paragraphs never distance themselves from the press agents’ wink and nod–that’s this is all about holiday fun. We are meant to forgive or forget that’s it’s free publicity for profit-making companies guised as human interest in the very profitable, click-rich Web category, called “odd” or “strange” news.

AP waited until the sixth paragraph to reveal the commercial underpinning of the entire story: ” ‘We went all out, hungry and focused,’ said Booker, who like the others was preparing for Saturday’s annual Fourth of July hot dog eating contest. Friday’s match was sponsored by Major League Eating and Ringling Bros. and Barnum & Bailey.”

If AP and the numerous other media outlets who ran this story charged for advertising space instead, maybe they would show more profits? (I Googled this AP non-story. There were 5,180 results). Here is the pathetic WPIX Channel 11 “news” video of event.