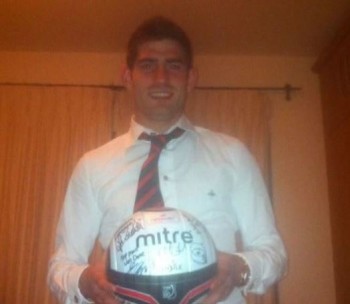 Yet another male BBC host has been slammed for sexist opinions about female rape victims. Host Nick Conrad touched off a controversy this week by suggesting a woman has the responsibility to avoid being raped.

Women are, he said on the air, “partially responsible” if they “tease, if you jump into bed naked with a man, if you give him all the signals.” Conrad’s comments were made while discussing Ched Evans, a football player convicted of rape, who denies that it was rape.

“I think women need to be more aware of a man’s sexual desire that when you’re in that position that you are about to engage in sexual activity there’s a huge amount of energy in the male body, there’s a huge amount of will and intent, and it’s very difficult for many men to say no when they are whipped up into a bit of a storm. And it’s the old adage about if you yank a dog’s tail, then don’t be surprised when it bites you. Or you can’t keep snakes in the garden and think they’ll only bite your neighbours.”

Both he and the BBC have apologized for the comments and broadcast regulator OfCom said it may investigate complaints, according to the Guardian.

Listen to audio of his comments posted on the Mirror‘s website.

He went on, according to the Telegraph,

“What I’m trying to say is that women also have to understand that when a man’s given certain signals, he’ll wish to act upon them and if you don’t wish to give out the wrong signals it’s best probably to keep your knickers on and not get into bed with him. Does that make sense?”

Conrad did say it’s “absolutely abhorrent” if a man has sex with a woman and “a woman says no.”

In a news story about the comments, the BBC pointed to Conrad’s comments that rape is “abhorrent” but said “BBC management has made it clear to Nick that some of his comments were very ill-judged and he has apologised for any offence that may have been caused.”

Conrad also apologized Nov. 20 on air, essentially repeating the apology the BBC issued. He said, according to the BBC:

“I made it clear on several occasions that rape is an abhorrent and inexcusable crime and that women and victims were in no way to blame. Some of my comments in one section of the discussion were ill-judged and were offensive to some. I apologise to anybody who was offended by what I said.”

Rape Crisis’ Katie Russell called the comments “ignorant,” “unfounded, outdated, and offensive to me” and “equally insulting to both men and women.”

“As part of a wide ranging discussion where Nick invited the listeners to talk frankly about the Ched Evans case, he made it clear that rape is an abhorrent act. BBC management has made it clear to Nick that some of his comments were very ill judged and he has apologised for any offence that may have been caused.”

The BBC previously got in trouble last month when BBC host Michael Buerk blamed the rape victim in Evans’ case because she was drunk.

“Nobody comes out of the Ched Evans rape case with any credit – not the victim who’d drunk so much she could barely stand, nor the two footballers who had sex with her in the most sordid of circumstances,” he said.