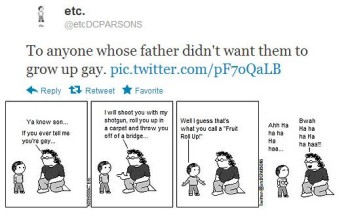 The cartoon in question, via Metro Weekly.

The Arizona Daily Wildcat apologized Oct. 17 for its “serious error in judgment in printing a cartoon that some readers felt was homophobic and inappropriate.”

The Wildcat identifies itself as “an independent news organization serving the University of Arizona” with a “daily circulation” of 10,000.

According to the Wildcat’s apology, “printing the cartoon was irresponsible to our readers.” One of those readers called the cartoon “violently homophobic and abusive to children” as well as “inflammatory and beyond the limits of both humor and what should be published in this university’s newspaper” in an email to the newspaper published by the Wildcat.

“Printing the comic strip was a failure to weigh the perspectives and experiences of others. We regret our mistake, and that we cannot take back the damage it has caused. We’re sorry.”

In a statement to Tuscon NBC affiliate KVOA-4, Bui said she wouldn’t resign over the incident, but took “responsibility” for “automatically finalizing” the comics page “without considering the perceptions and perspectives of others.”  Bui also commented:

“The intention of Tuesday’s comic strip was to satirize hate speech and the root of crimes against the LGBTQ community by highlighting its horrors, not by making light of them. This is something I thought was apparent as I rushed to finalize pages before deadline, but it was also something I did not think through. I deeply regret not taking any time to consider how the cartoon’s cynicism and satire would play out in print.

The cartoonist, D.C. Parsons, apologized in a letter published by the newspaper.  Parsons wrote: “I would like to formally apologize to anyone who I may have offended in my comic ‘etc.’ on Tuesday. The comic was not intended to offend. The desired end means of my work is solely humorous.”

According to Tuscon’s KGUN-9, Parsons responded to the question of if he was a “homophobe” with “absolutely not, that’s ridiculous” and again defended his cartoon’s intention as “humor” with “no malicious connotations whatsoever.”

Parsons added that his cartoon was “based on an experience from my childhood” and that he has “always used humor as a coping mechanism.” (See Parsons’s full apology on the Wildcat’s website.)

The Wildcat’s Bethany Barnes, who identified herself as “readers’ representative” but is listed as “managing editor” on the Wildcat’s website, also weighed in on the cartoon, writing that “my heart hurts” because of the issue.  “Tuesday’s cartoon was disgusting,” she wrote.  “Perhaps it was a lousy attempt at satire by a college student who shouldn’t be doing satire. He clearly doesn’t understand the issue he aimed to satirize.” (Barnes told iMediaEthics by email that “My title is managing editor and one of my responsibilities is to be the newspaper’s readers’ representative.”)

“The comic didn’t do anything to call out or mock the homophobic and hateful father. It just made the action look acceptable.  It’s sickening and we don’t need a cartoon to showcase hateful name-calling.”

Barnes added that she didn’t think Parsons’ apology was “sincere,” but instead “defensive.” According to Barnes, as is, at the Wildcat, unlike other editorial content, “one person usually reviews cartoons: the editor-in-chief” and “comics are too often reviewed as more of an afterthought and not as editorial content.”

She expanded on Bui’s note about the incident about the Wildcat’s review writing “cartoons…should be treated with the same care” and oversight as editorial content.  “We’ll be meeting to establish a policy that has more people looking over comics, because what happened was unacceptable.”  Further, the Arizona Daily Star reported that Bui said by email that moving forward “there will be at least three sets of eye on the page” for comics.

Dan Riemold, who runs the blog College Media Matters and identifies himself as a “college journalism scholar,” writing on the Huffington Post, called the cartoon strip “quite possibly the worst cartoon or comic depiction I’ve seen within the student press, and I’ve covered this world daily for half a decade. If there is a socially-conscious message buried in the strip, as the cartoonist suggests, it is so hidden I don’t see it- at all.”

Comic Book Resources noted that there’s a Change.org petition titled “Daily Wildcat: Fire your cartoonist, editor-in-chief, and copy editor.” As of Oct. 20 at 8 PM EST, the petition is just shy of 7,000 signatures.

The Phoenix New Times added that the Wildcat was previously in hot water for a cartoon that included “the n-bomb in a strip about President Obama.” In that 2008 case, as College Media Matters’ Riemold wrote at the time, the Wildcat was accused of racism in its “Stories from the Campaign Trail” cartoon, but the newspaper claimed the cartoon wasn’t supposed to be published.

Tuscon News Now reported that Bui added Parsons has “a history of controversial cartoons” and that she “was not aware of that when I hired him.” However, Bui wrote Parsons is “free to apply” to the newspaper “next semester.” Some of Parsons’ previous cartoons are published on his Facebook page, as Metro Weekly noted.

iMediaEthics has written to Bui for more information and will update with any response. We also sent a message to Parsons on Facebook.

UPDATE: 10/22/2012 5:48 PM EST: iMediaEthics had asked Parsons how long he worked for the newspaper, if he had an response to Barnes’ criticism of his apology and if he had any other comments about this incident.  In a message response to iMediaEthics from Parsons’ Facebook account, “EtcDCParsons,”  Parsons wrote:

“I’ve been making comics for the Daily Wildcat since last semester. I’ve had previous trouble and controversies with my comics, but it wasn’t such a problem last year because my editor read my comics and said what not to say.

“To Bethany Barnes- That was the first draft of my first apology, and I sent it to the editor (once again) and told her to help me with corrections and what I should most appropriately say. Also at the time I had no idea how offended people were about the comic. I am sincerely sorry that my comic has offended so many people. It should have never went to print.

“My comics, my cartoons, and my jokes often address social taboos from a humorous approach. They are intended to make people laugh and open a dialogue to discuss cultural problems without any malicious intention.”

iMediaEthics has asked the Wildcat if it has any response and will update with any.