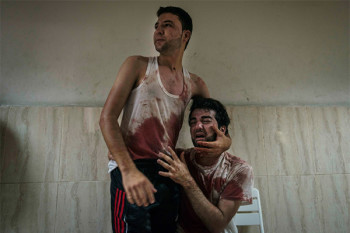 New York Times states that this photo that shows grieving brothers after shelling in Gaza killed their father was not staged. (Credit: Sergey Ponomarev for The New York Times)

The Atlantic’s senior editor David Frum says he falsely accused the New York Times, Reuters and other news outlets of publishing staged, fake photos from Gaza and has apologized.

The photos in question showed two men, who were sons of a man who was killed by a shelling, according to the photo captions. They were taken at Khan Younis hospital.

Frum tweeted to a blog post by Thomas Wictor who claimed the photographs were faked. One key question raised was why in some photos the brothers are covered in blood and another photo, the hands and face of one of the brothers are cleaned.

In this photo, the brother in the chair does not appear to have blood on his hands, arms or face. (Credit: Reuters, Ibraheem Abu Mustafa, screenshot)

Wictor, whom Frum describes as his friend, argued that the photo with clean hands had to have been taken before the photo where the man is covered in blood because the man’s hair is “dry and fluffy.” Moreover, he noted that the man doesn’t appear to be crying in either photo.

Wictor also said that he saw conflicting information in captions where one photo identified one of the brothers as injured during an airstrike, and the rest of the photos identified him as the son of a killed man.

The caption that identifies him as injured was from the Associated Press.

iMediaEthics notes there is no evidence that he wasn’t injured in the airstrike that killed his father. iMediaEthics has written to the AP to ask if in fact the man was injured, or if that was a caption error.

There was another contradictory fact in captions, critics noted and Bag Notes News tried to minimize. One caption from AP says the man was injured in an “airstrike” whereas another from Reuters says it was a “shelling.”

Bag News Notes suggested the trauma for photo editors may have allowed the error but certainly excuses it. This begs the question: Are Reuters photo editors at the front lines or sitting in New York? iMediaEthics is writing to Reuters to ask.

Frum, however, did not state any clear evidence before making defintitive accusations, which is troubling. The accusation of photo fakery was comprised of speculation and questions about the photos. Without having the goods to back up his claims, his accusations were quickly shot down in the photo community and by the publishers of the photographs.

In the NYT version of the faked photo, the man does not yet have blood on his arms. Reuters was given its version later, I suppose

Despite Frum’s observations in tweets, the New York Times stood by the photographs.

The Times told Poynter that “Frum’s claims are false,” explaining the Times had a “complete account from the photographer, Sergey Ponomarev” of how he got the photos.

To support this defense, Ponomarev provided the Times “84 pictures in total that give a complete understanding of the events as they unfolded.”

The site found a photo of the same man covered in blood getting out of an ambulance along with numerous other photos of him pictured throughout the hospital.

By piecing together what it saw as the sequence of the photos, Bag News Notes says it debunked Wictor’s claim the man was covered in blood as part of staging after he got to the hospital.

Further, Reuters also checked with its photographer about the man not having blood on his hands and face in some of the photos. Reuters said it confirmed the man washed the blood off of himself. Reuters told Bag News Notes:

“We’ve confirmed with our photographer that the man in the photo washed his hands and face after his father’s body was admitted to the hospital.”

The New York Times also interviewed its photographer, Ponomarev, about his photos in the hospital.

“In one ambulance there was a heavily injured older man and two younger men, and one of them was covered with blood and really upset. He fell on his knees, calling on Allah and gesturing,” Ponomarev said of the photos of the family arriving at the hospital.

He said he later went back to the family. “So I photographed other people and then came back after the other media left him alone. I saw his brother take him to a nearby room and he must’ve washed him off because afterward there was no blood on his face and his hands were clean. He was sitting on the chair and seemed calmer, and that’s when I took the photo.”

Frum published an apology July 30 on The Atlantic website.  Frum said his “mistake” was posting tweets questioning the photos. “In three tweets, I expressed disbelief in the authenticity of the images,” Frum explained. “Michael Shaw at the Bag News blog painstakingly argues that I was wrong to do so.”

Even though his accusations of fakery were posted on Twitter, not in The Atlantic, he apologized on The Atlantic‘s website.

While Frum admitted he “should not have cast doubt on them” and apologized to the photographer, he defended the fact that he was questioning the photos because of propaganda in the Middle East.

He did not apologize to the other photographers who took pictures of the brothers or the two brothers who were shown in the photographs, who were accused of fakery in their reaction to their father’s death, Bag News Notes noted.

Propaganda “was not the case with the photos I disputed. I was wrong on Twitter, and I retract and apologize for my mistake.”

UPDATE: 8/6/2014 9:33 PM EST Shaw from Bag News Notes responded to iMediaEthics’ inquiry asking if Bag News Notes used timestamps to verify the sequence. ” I didn’t have access to timestamps so those were logical deductions,” he wrote. “The basic issue, however, had to do with the sequence in time between the Times and Reuters portrait and the AP shots. That, through the testimony of the players involved, was verified.”