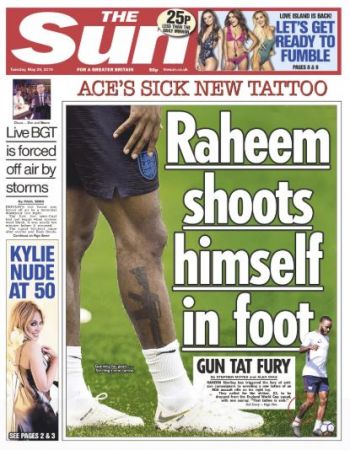 The UK Sun denied that its article on English football player Raheem Sterling’s gun tattoo was racist. The Sun‘s May 28 front page story reported on a tattoo of a M16 assault rifle on Sterling’s right lower leg was headlined, “Raheem shoots himself in foot.”

The Sun reported that Sterling “triggered fury among anti-gun campaigners” and that there are calls for Sterling to either remove the tattoo or be cut from England’s World Cup team.

In a letter to and published by the Guardian, the Sun‘s head of PR Andy Silvester responded to two columns from the Guardian critical of the Sun‘s reporting. A May 29 Guardian column was headlined, “Raheem Sterling is a victim of vicious tabloid snobbery.” A May 30 Guardian column was headlined, “As Raheem Sterling knows, successful black men have targets on their back.” That column claimed the Sun “attempted to immunise itself from allegations of racism by doubling down” and that the Sun has “muddled thinking on black communities.”

(For his part, Sterling said he promised himself as a child he wouldn’t touch guns because his father was killed by a gun, and that he has the tattoo on the same leg he “shoots” with — or kicks with. The New York Times noted that Sterling is often criticized in the media and that “it has been the habit — or the sport — of British coverage to build up star players simply to knock them down again.”)

THE SUN: Raheem shoots himself in the foot #tomorrowspaperstoday pic.twitter.com/OYTUeoVPcJ

“Ignoring this, Guardian commentators have instead accused the Sun of racism and prejudice,” Silvester wrote. He continued,

“Race was not a factor in the slightest in our decision to cover the story. We would have run the same story had the tattoo been on Jordan Henderson’s arm or Harry Kane’s back, and we expect the reaction of campaigners would have been exactly the same. As a role model for young people in the context of a gang violence epidemic, it is hardly a surprise that those on the ground in violence-afflicted communities reacted so angrily. To focus on the perceived racism of the tabloid press is to willfully miss the point of the entire story.