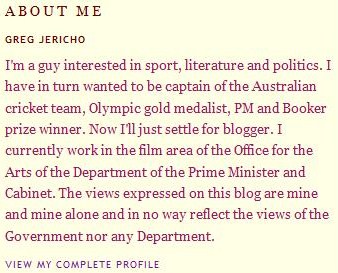 See above, it's the new online profile for Greg Jericho, the once anonymous blogger who writes the blog, Grog's Gamut. Jericho was recently outed by The Australian. (Credit: Grog's Gamut)

The decision by The Australian, a Sydney-based national broadsheet, to out an anonymous, influential blogger has generated controversy as journalists questioned the newspaper’s motives.

James Massola, the Australian reporter who outed Greg Jericho as the writer behind the blog “Grog’s Gamut,” explained his reasoning in a Sept. 28 article.  Massola revealed Jericho’s identity in a Sept. 27 article, noting that the blog “shot to prominence after making some sharp observations about media coverage of the 2010 election.”

“As a prolific blogger and tweeter, Jericho was putting information in the public domain to provoke discussion and debate. It might have been a hobby, but by engaging directly via Twitter with dozens of journalists, Jericho and his views became part of the public debate – and in an age in which the dissemination of information has been democratised, his scribblings had an influence,” Massola wrote.

He explained that because Jericho’s blog has “political influence,” which, like journalism, requires “responsibility and the need for accountability.”

“Jericho was anonymous, and public interest in his identity was growing parallel to his influence. In my view – and in the view of this newspaper – the fact he had a partisan point of view, worked in the public service and wrote about his department was a matter of public interest,” Massola wrote.

Massole added that he believes Jericho should continue to blog because he “is an engaging, partisan commentator who writes well.”  While Jericho only blogged outside of work, Massola wrote it was inappropriate for Jericho to send “literally hundreds of partisan political tweets out, during work hours,” even if Jericho didn’t use confidential information or write about his area of work.

He suggested Jericho broke the Australian Public Service (APS) code of conduct. Jericho “shows a strong preference for the ALP, despite the Public Service code of conduct stating that “the APS is apolitical, performing its functions in an impartial and professional manner,'” Massola wrote.

Jericho is quoted as telling Massola that he wanted to be anonymous because blogging is a hobby, and he “felt it was best to keep my job and my hobby separate, so there could be no perception that my writing was in any way connected with my work.” He also explained that he doesn’t write about his work and that he’s worked under both Liberal and Labor governments. Prior to the outing, Jericho reportedly told Massola that only his family and roughly 20 public servant friends knew he was behind the blog.

“I never hid that I was a public servant, (but) it might mean I stop blogging,” Jericho told Massola.

The Australian also wrote Sept 28 in an opinion article in defense of the outing.

“Naming Mr Jericho was a good story and good for the internet. He is not a whistleblower and deserves no special treatment. He has learnt what he should have known from the time he started his blog in 2008 — anonymity is even less valued in the internet age than ever. With 1000 readers a day, exposure on the ABC website The Drum, and the chutzpah to attend a blogging conference last week where he was surrounded by the twitterati, Mr Jericho can scarcely be surprised his cover is blown. The Australian is not interested in shutting down Grog’s Gamut or in silencing dissent.”

In his own blog post, Jericho reported his identity being revealed, noting that the overriding reason he saw for his anonymity ending was because the ABC’s Mark Scott referenced his blog post in a speech once.

“Apparently knowing I am Greg Jericho is ‘in the public interest’ because the head of the ABC, Mark Scott, mentioned in a speech that my blog post attacking journalists’ coverage of the campaign (and specifically the lack of policy) was mentioned at an ABC executive meeting:

“So because the head of the ABC took notice of something I wrote anonymously about journalism, I need to be named. I guess the lesson here is if you want to blog anonymously, don’t do it effectively.”

Further, Jericho questioned why Massola waited until now to name him as behind “Grog’s Gamut” since Jericho says Massola has known his alter ego since November 2009. Jericho noted that he is apolitical when at work, as instructed in the APS code, and reminded that he doesn’t write about his policy area (currently film) “except in a very peripheral sense – ie movies I like and the odd promotion of upcoming Australian films that I think looks interesting.”

“I have never written anything which I have gleaned through work. All information I use comes from the media or press releases or public reports. This is pretty clear from anyone who regularly reads this blog – you never find “breaking” or “inside” news here – you find opinion and analysis,” Jericho explained.

His blogger profile now identifies him as working for the “film area of the Office for the Arts of the Department of the Prime Minister and Cabinet.”

The Australian’s Media Editor, Geoff Elliott, also defended the outing, writing that “if you are a public servant and blogging and tweeting, sometimes airing a partisan political line,” you don’t deserve anonymity.

“If you are influencing the public debate, particularly as a public servant, it is the public’s right to know who you are. It is the media’s duty to report it,” Elliott explained.

iMediaEthics wrote to Jericho asking if he would continue to blog, what his employer’s reaction was, and for comment on other questions.  In response, Jericho wrote “Thanks for the questions, however at this stage I have no comment.”

Media Criticism of the Outing

New York University professor and media critic Jay Rosen disagreed with the Australian’s defense and asked why the newsaper was declaring war on bloggers.  Rosen is quoted as saying that he didn’t think the newspaper had justified its decision well and has seemingly “declared war on any blogger who 1.) influences public debate and 2.) chooses to remain anonymous.”

“Clearly, the newspaper feels it has a public service obligation to keep revealing the names behind bloggers who write anonymously. As soon as they become influential, they are to be outed by The Australian as a matter of duty. That’s what I mean, then, by “seems to have declared war,” The Australian reported Rosen said.

While Rosen explained that he doesn’t think that there’s an “inherent right to anonymity,” he finds that there has to be “some justification” for outing an anonymous blogger’s name and employment, especially when that blogger has been quite critical of News Limited journalism – a fact that The Australian has not seen fit to mention yet.”

He also wondered if the Australian was actually challenging Jericho’s adherence to the APS guidelines and why the newspaper “issued its declaration of war.”

Likewise, Crikey’s Margaret Simons argued that the newspaper wasn’t unethical in its outing.  It was “just mean.” The media ethics of protecting anonymous sources doesn’t apply to anonymous bloggers because there hasn’t been any agreement to keep confidentiality.

“So far as I know, Jericho made no agreement with any journalist about confidentiality, so I don’t think it was unethical to out him,” Simons wrote.  Further Simons wrote that she thinks The Australian’s reason to out Jericho because ABC’s Mark Scott referenced his blog is “fairly hollow.”  See Simons’ post here.