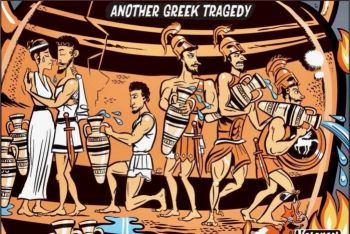 The Advertiser, an Adelaide, Australia-based daily tabloid, upset readers with a cartoon about the Greek wildfires. The cartoon, by Jos Valdman and headlined “Another Greek Tragedy,” seemed to be making light of the fires, which have, to date, killed 91 people in Greece. Valdman’s cartoon depicts men and women dressed in ancient clothing splashing water on the flames from equally ancient-looking urns.

The Advertiser‘s editor Matt Deighton apologized July 27 for its cartoon, saying it received complaints from readers and “the people of Greece” and “affected families.” The Advertiser is a News Corp.-owned daily newspaper in South Australia. iMediaEthics has sent Valdman a message asking if he stands by the cartoon.

The cartoon “was intended as a tribute to the Greek people – reflecting on the tragedy they now face and their long history of resilience, stoicism and courage in the face of hardship,” the Advertiser‘s apology stated. “But many of you told us you found the cartoon to be offensive, insensitive and in bad taste.”

Bill Gonis, the president of the Greek Orthodox Community of South Australia, told the Australian Broadcasting Corp. Radio Adelaide that the cartoon “extremely upset” the community.

“We’ve got our own bushfire history — never mind nationally, but here in this state especially — but somehow we find the time to display Greeks behind the times in putting out a fire using water from vases,” he said.

RT loses appeal of OfCom fine
Corrections: The Roomba didn't do it! Irish Libel Law, Irish or British, How many Troops Abroad?