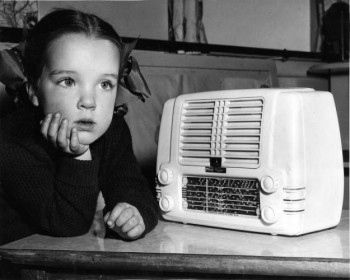 Vintage photo of little girl listening to the radio.

During a Nov. 25, 2013 program, host John Laws was responding to listener e-mails, including some from the man whose privacy he soon violated.

One e-mail was “criticising [Laws’s] response to an earlier caller and referring to ‘cash for comment,'” ACMA reported. In response, Law called him a “spineless son-of-a-bitch” and “gutless idiot” for complaining and only providing his first name and no contact information.

The reference to “cash for comment” dates back to 1999, when Laws and another host were found guilty by ACMA of “cash-for-comment,” or being paid to “present as news what was in reality paid promotional material,” the Guardian reported. Fairfax Media, the owner of the station where Laws was working at the time, had to pay a $130,000 fine. More on the case is included in this 2009 article from Australian media website Mumbrella.

Laws was wrong during the Nov. 2013 broadcast about the listener not providing contact information. Indeed, the man had included his cell phone number in his email, so that Laws could contact him and discuss his complaints on air. The man e-mailed Laws a second time to alert the radio host to the fact that he had provided a phone number. At that point, Laws realized the phone number had been cut off at the bottom of the email and admitted his verbal attacks weren’t fair.

These exchanges between Laws and the complainant took place during a single three-hour broadcast, according to ACMA’s report.

Laws then identified the listener on the air by his full name and then provided his cell phone number. Laws “twice read out, on air, the full name and mobile phone number of a man who was critical of his program,” the broadcast regulator ACMA ruled. Breaking the man’s privacy was not in the public interest, ACMA stated. iMediaEthics has asked ACMA how many times the man exchanged remarks with Laws’ show.

The complainant told ACMA, “I believe that this is a serious breach of my privacy” and that having his phone number broadcast “caused me much distress.”

The station denied it was at fault, arguing the compainant “antagonised Mr Laws via email and over the telephone, and goaded him into reading out his telephone number.”

However, the ACMA didn’t accept that excuse. Despite Laws arguing that the listener wanted his number read on air, the ACMA said the man “most likely” was just trying to give his number in order to “set up a conversation with him either on or off air.”  Further, “there was nothing in the language of this email to suggest that the complainant was giving his consent to Mr Laws broadcasting his name and mobile number on air.”

Laws didn’t have to apologize, according to the Australian.