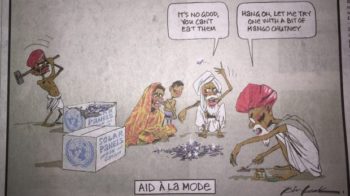 The Bill Leak cartoon in question.

At the time of publication, the cartoon was criticized as racist and stereotypical, the Australian’s competitor the Sydney Morning Herald reported.

The Australian, which is owned by News Corp., defended its cartoon to the press council as mocking “climate change activists who would send poor people solar panels rather than give them something they needed — cheap power, aid and assistance,” the press council wrote. Since the cartoon was published during the UN Climate Change Conference last year, when an author and academic had discussed a specific case where a town in India was sent solar panels, the Australian argued it was clearly focused on climate change and not Indians.

“The publication said the cartoon did not intend to, and did not, ridicule Indian people,” the press council reported. “It refers to mango chutney in the context of a typically Indian food, but this reference was not offensive. The cartoon had depicted Indian people in a barren, rural environment, but this was a reference that was accurate and not offensive.”

The Australian declined to comment, pointing iMediaEthics to the ruling.

The press council noted some readers may have been offended, but ultimately decided the cartoon was fair game, it said, because cartoons get leeway for exaggeration.

“The Council considers that the cartoon is an example of drawing on exaggeration and absurdity to make its point,” it wrote. “While some readers may have found the cartoon offensive, the Council does not consider that the publication failed to take reasonable steps to avoid causing substantial offence, distress or prejudice. Accordingly the Council concludes that its Standards of Practice were not breached.”

Earlier this year, the press council received more than 700 complaints over a cartoon by Leak showing Aboriginal people. In that case, the press council decided against issuing a ruling. Instead the Australian published two op-eds from Aboriginal groups in response critical of the cartoon.