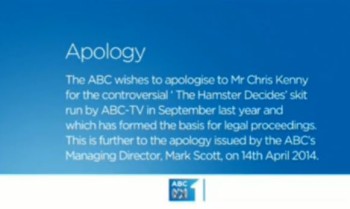 The Australian Broadcasting Corp. has apologized on air and settled a libel lawsuit over its doctored photo calling journalist Chris Kenny a “dogf**ker.”

Kenny, a journalist for News Corp Australia, sued the ABC over a September segment aired by its late night entertainment program The Hamster Decides that showed a doctored photo of Kenny appearing to have sex with a dog. The photo was captioned “Chris ‘Dogf***ker* Kenny.”

Kenny told iMediaEthics he first asked for an apology but when he didn’t get one, he filed the lawsuit. Last month, ABC issued an apology, but not on-air, and sent a “settlement proposal” to Kenny. The proposal said ABC was “confident” he wouldn’t win and that they’d apologize in court if he dropped the case, as iMediaEthics wrote. Kenny responded to that letter by saying the ABC was trying to “bully” him with their settlement letter, which ABC provided to the media, and that he wouldn’t settle under their proposed terms.

Now that the ABC has settled with Kenny, The ABC aired an apology on air on June 4, the Sydney Morning Herald reported. The ABC will also pay an undisclosed settlement for damages and legal costs.

“Having reviewed the issue, Mr Scott, as the Editor in Chief of the ABC, has come to the view with the ABC’s Director of Television that the ABC should not have put the skit to air.

“The ABC apologises to Mr Kenny for having put the skit to air, his depiction in the skit and because it was triggered by his criticism of the ABC. The ABC is sorry for the distress this incident has caused Mr Kenny and his family.”

The Australian published a clip of the 45-second on-air apology statement, below:

In response to the settlement, Kenny said to The Australian, “It shouldn’t be this hard to get the taxpayer-funded national broadcaster to behave decently, but at least it’s finally happened.”

He added that he believes his public criticism of the ABC prompted the skit, adding that he was criticized for his decision to sue the ABC. “I was singled out because I dared to criticise the ABC and it (the skit) was an attempt to intimidate people out of criticising the ABC,” he said.

He added that it’s OK for the media to criticize him but “this case was so obviously beyond the pale.”

Kenny also called for the ABC to act better in handling these types of complaints because the average person can’t “take on” the ABC.  Moving forward, he suggested, “I think really when they’ve done wrong, they should look at it immediately themselves, come to a reasonable judgment and if they’re wrong apologise quickly.”

The ABC issued the following statement to the Australian Associated Press about the settlement:

“The ABC has reached a settlement with Mr Chris Kenny and is pleased to see this matter now resolved,

Staff involved in the original segment mocking Kenny may not “republish the sketch or to detract from the settlement,” the Sydney Morning Herald added.

iMediaEthics has written to the ABC and Kenny for further comment.