BBC Being Sued over Scottish Documentary on Sale of the Rangers 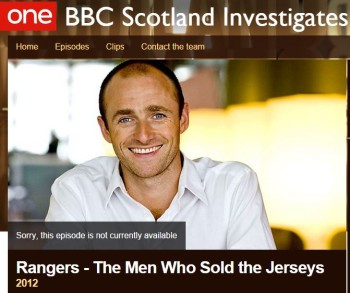 Three accountants are suing the BBC for  £3 million over a documentary about the sale of the Scottish football (soccer) club the Rangers, the Scottish Daily Record reported.

The BBC documentary Rangers: The Men who Sold The Jerseys aired in May 2012.  David Grier, Paul Clark and David Whitehouse, all accountants at Duff and Phelps,  say the documentary defamed them. Their firm helped Craig Whyte buy the club in 2011 and then was “appointed as Rangers’ administrators after the club’s finances went into meltdown following the sale.” The documentary questions that relationship, the Record says.

The broadcast “made serious allegations about Duff and Phelps partner Grier and his role in Whyte’s takeover of Rangers, where Whyte used funds raised from ticketing firm Ticketus,” the Daily Record reported.

The documentary, Rangers: The Men Who Sold The Jerseys, is posted on YouTube here. A description for the documentary posted on the BBC’s website reads:

“As this proud footballing giant stands on the brink of extinction, BBC Scotland Investigates the inside story of the scandal which brought Rangers FC to its knees. This is a programme based on dozens of secret emails, letters and documents which uncover the truth behind the tax scheme which threatens the club’s very existence, and reveals what went on behind the scenes in the run up to Craig Whyte’s infamous takeover. From the day Sir David Murray took up the reigns at Ibrox, through the nine-in-a-row Championship years to the ignominy of owner Craig Whyte’s reign and the plunge into administration, this programme charts the descent from glory into chaos of one of Scotland’s great institutions. Along the way, investigative reporter Mark Daly goes in search of answers to the questions every Scottish football fan is asking, and attempts to confront those who are responsible for the Ibrox club’s plight.”

A spokesperson for BBC Scotland told iMediaEthics by e-mail “We stand by our journalism and will be contesting it vigorously.”

BBC Being Sued over Scottish Documentary on Sale of the Rangers