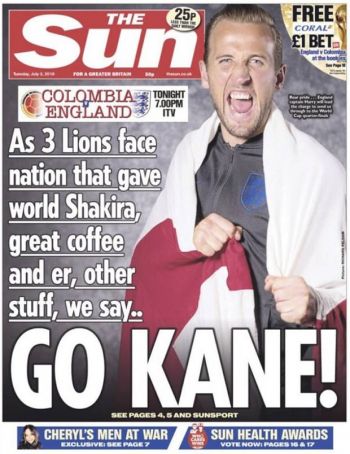 The UK Sun upset the Colombian ambassador with its June 3 front page headline linking the country to drugs. The front page headline, about England’s pending World Cup match with Colombia, read, “As 3 Lions face nation that gave world Shakira, great coffee, and er, other stuff, we say … GO KANE!” [“GO KANE” is a pun on “cocaine” and “Kane” is also a reference to England’s star player, Harry Kane].

The ambassador called for an apology, according to the Guardian.

“It is rather sad that they use such a festive and friendly environment as the World Cup to target a country and continue to stigmatize it with a completely unrelated issue,” Colombia’s ambassador to the UK Nestor Osorio-Londono told news outlets, including iMediaEthics. The embassy said it didn’t complain to the UK press regulator the Independent Press Standards Organisation though.

While the embassy may not have complained, IPSO did receive 14 complaints over the front page, an IPSO spokesperson told iMediaEthics.

The Sun pointed iMediaEthics to its statement to Press Gazette, in which it called the front page “suitably light-hearted considering the context” and added it was “not tremendously easy to come up with puns about Gabriel Garcia Marquez.”

While the Sun did publish an apology, it was fully tongue-in-cheek.

“The front page of yesterday’s Sun may have given the impression that Colombia is well known for its cocaine trade.

“This was unfair on the Colombian people, who are far more embarrassed by the way their cheating, fouling, play acting, mean-spirited national football team played last night.

“We are happy to set the record straight.”

Apology of the year. 👋👋 pic.twitter.com/jVkDuBuaes