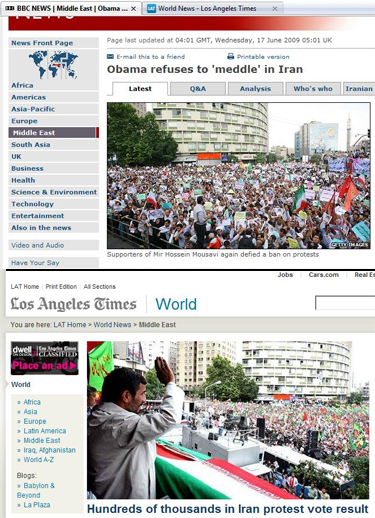 BBC editors admit they mistakenly captioned a Getty photo of a pro-Ahmadinejad rally as pro-Mousavi. A blog, WhatReallyHappened, is indirectly acknowledged by BBC, as the one who first reported the error.

BBC editors write June 19 that they made a caption error two days before–that bloomed into controversy and accusations of biased coverage by bloggers who discovered the error.

BBC explains, “We made a mistake in a picture caption published on BBC News online. In the story Obama refuses to ‘meddle’ in Iran, we mistakenly stated that a Getty agency picture of a pro-Ahmadinejad rally was a pro-Mousavi rally.”

BBC indirecly acknowledges WhatReallyHappened (WRH) blog’s discovery (via a reader) of the error, and links to their site, but denies, also indirectly, that the mistake was born from their manipulation or editorial bias.

WRH’s states they noted the botched BBC caption after reading the Los Angeles Times. They write, “BBC’s lead Iran story- it shows the same crowd [as in the Times, clarification mine], zoomed in to cut out Ahmadinejad. It is clearly the same protest as in the background are the same tree and odd circular building.”

WRH continues, citing the BBC caption, “The huge PRO-Ahmadinejad rally reads ‘Supporters of Mir Hossein Mousavi again defied a ban on protests‘- a blatant lie and deliberately misleading description of what is actually occurring in Iran!”

BBC editors said they corrected the error and added an update. “Update 19 June 2009: an earlier version of our caption was incorrect. We wrongly stated that this was a pro-Mousavi rally when in fact it was a pro-Ahmadinejad rally.”  The new caption reads: “Tehran has seen mass demonstrations by all sides since the disputed election (see correction below).”