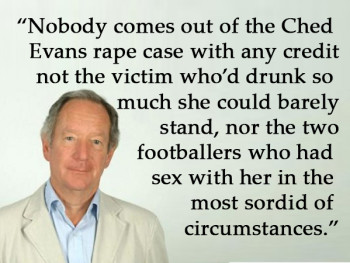 A BBC host is in hot water for comments suggesting a rape victim was to blame because she was drunk.

Host Michael Buerk has been accused of victim-blaming when he said:  “Nobody comes out of the Ched Evans rape case with any credit – not the victim who’d drunk so much she could barely stand, nor the two footballers who had sex with her in the most sordid of circumstances.”

His comments were made during a promo for a Radio 4 program.

Buerk was remarking on soccer player Ched Evans, who just got out of prison following a rape conviction. Evans denied he raped the woman. “Another defendant, Port Vale defender Clayton McDonald, was cleared,” the Guardian reported.

Evans and McDonald both claimed the sex was consensual. The judge however pointed to CCTV footage of the woman showing she “was in no condition to have sexual intercourse” because she was too intoxicated.

A BBC Radio 4 spokesperson apologized for Buerk’s comments but denied that he was victim-blaming. The spokesperson told the Guardian:

“There was no intention to suggest that the victim was in any way at fault, and we apologise if the way this live trail was phrased suggested this.

“Tonight’s [Oct. 22] Moral Maze will ask whether a convicted rapist who maintains his innocence should be entitled to get his job back.”

Buerk also admitted his comments were “clumsy” but seemingly stood by them. He said on BBC Radio 5 Live, according to a Guardian report:

“If I gave the impression that the two issues of her being drunk and the rape for which Ched Evans was convicted were some sort of moral equivalent, that would be terrible and something I would need to apologise for. It was not my intention.

“Having said that the fact that the victim was drunk was the central issue in the court case. In fact it was her case that she was so drunk she was incapable of giving consent and therefore it was the crime of rape.’

Despite the BBC and Buerk’s denials that he was slamming the victim. Rape Crisis England and Wales spokesperson Katie Russell called the comments “inappropriate and potentially damaging,” as well as “deeply offensive” and distressing, the Independent reported.

iMediaEthics has written to the BBC and representatives for Evans for comment.

Earlier this year, Buerk said it was “fair enough” for older employees and employees who lose their looks to be fired. “If you got the job in the first place mainly because you look nice, I can’t see why you should keep it when you don’t,” he said, the Guardian reported in April.