Being Gay is a 'Weird Quirk?' Rooster's Gavin McInnes on leave after offens

Being Gay is a ‘Weird Quirk’? Rooster’s Gavin McInnes on leave after offensive Thought Catalog article 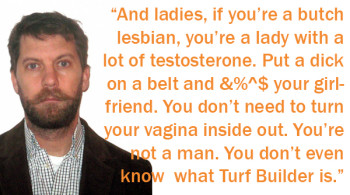 After writing for Thought Catalog about transphobia, Gavin McInnes must take an “indefinite leave of absence” from his job as chief creative officer for New York ad agency Rooster, Ad Week reported. McInnes’s article attacked transgender and gay people and called being gay “a weird qiurk.”

The article that got McInnes, co-founder of both Rooster and Vice magazine, in trouble was titled “Transphobia is Perfectly Natural.” Thought Catalog describes itself as “a website dedicated to your stories and ideas.”

The article, which is still published, now features a note warning readers that other readers have complained over its “hateful or abusive content.” The note reads:

“The article you are trying to read has been reported by the community as hateful or abusive content. For more information about our reporting system head to our about page.”

McInnes claimed in his article that “we’re all transphobic” and that “there are no old trannies” because “they die of drug overdoses and suicide way before they’re 40 and nobody notices because nobody knows them.”

The Aug. 12 article is offensive, graphic and vulgar, iMediaEthics notes. A portion of it reads (be warned)

“You have a problem with a guy having his penis removed? He’s a chick, you asshole. God fucked up and made him a dude, but luckily we have the technology to fix that mistake. Why couldn’t he just be a drag queen? Well, for one, he needs to feel a penis inside him. No, his butt doesn’t count. He needs to feel a penis go in and out of his vagina—you know, like all women crave.”

The article goes on to say that “being gay is a weird quirk that happens at birth. It’s like being an albino.”

Rooster asked McInnes to take the absence and criticized his article, which has drawn a call to boycott Rooster. A spokesperson for the company told Ad Week:

“Gavin’s views are his own and do not represent those of the company or its members…We are extremely disappointed with his actions and have asked that he take a leave of absence while we determine the most appropriate course of action.”

Ad Week noted McInnes “has made controversial comments publicly before,” but “due to the tone of his work, some are unsure if it is meant to be taken seriously.”

McInnes’ Twitter profile says “Latest movie: How to be a Man. Latest book: The Death of Cool. Created VICE. CCO of Rooster NY. Fox News regular. I sue people who call me racist.”

He tweeted about his Thought Catalog article:

I’d like to formally apologize to all the trannies threatening to kill my family and “eat me alive.” You are NOT mentally ill.

iMediaEthics has written to McInnes and Thought Catalog.

Being Gay is a ‘Weird Quirk’? Rooster’s Gavin McInnes on leave after offensive Thought Catalog article